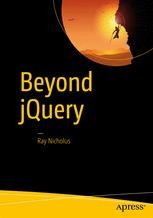 Learn about the most important concepts surrounding web development and demystify jQuery. This book gives you the confidence to abandon your jQuery crutches and walk freely with the power of the web API and JavaScript. Beyond jQuery doesn't just throw code at you - everything is explained in detail from the perspective of a jQuery developer.
jQuery is often injected into web applications and libraries with no logical reason for pulling it in as a dependency. Many web developers don’t really know when they need to use jQuery, and when they don’t - it's just a standard step when setting up a new library or web application. But relying solely on jQuery as your window to the web leaves large gaps in your knowledge. This in turn results in frustration when the abstraction that jQuery provides “leaks” and exposes you to the native aspects of the browser.
This book educates developers, reveals the magic behind jQuery, helps you solve common problems without it, and gives you more confidence to embrace the power of the web API and standardized JavaScript.

Who This Book Is For
Any web developer who is interested in learning how to live without jQuery, and deepening their understanding of web development.

Ray Nicholus is a software developer for Action Verb in Madison, Wisconsin, and has been heavily involved in web development for years. While much of his code is closed-source and not publicly available, he has spent a great deal of time contributing to the open source software movement, primary focusing on JavaScript, front-end library development, and developer education. His open source contributions range from large and popular open source projects, to small and focused libraries and educational code repositories. He is a true believer in FOSS, and has even written about the topic, such as in his post on Medium.com that detailed his decision to release Fine Uploader, a popular commercially-licensed JavaScript library, to the free open source software community.

Since 2012 he has been the lead developer and product manager of the Fine Uploader organization, which is commonly known as for its uniquely-featured cross-browser no-dependency file upload JavaScript library. His involvement outside of Fine Uploader in the open source community has included creation of other popular software libraries dealing with web components (namely ajax-form and file-input), video and image manipulation (such as frame-grab.js), and informative code collections, such as the notable fullstack-react project on GitHub and its associated articles on the Widen Engineering site. In addition to frequent coding outside of his day job, he also spends time speaking about web development topics. He has presented to students at the University of Wisconsin and DePaul University regarding careers in software development. Furthermore, he has prepared and delivered presentations to many professional developers regarding the mysteries of Cross Origin Resource Sharing, the importance of automated testing, the File API web specification, the web components specifications, agile software development, accessibility, and software architecture (among others).

He organized and taught a JavaScript 101 class targeted at interested professionals, and spoke about the usefulness of uploading files directly to Amazon’s Simple Storage Service from the browser via Fine Uploader.

His writing also includes the precursor to this book, the “You Don’t Need jQuery” series of blog posts, articles on Google Glass, and a large number of other articles that help developers integrate file uploading capabilities into their web application or library. He was also featured in an article in Fortune Magazine by Anne Fisher based on his experiences with Google Glass in the workplace.

He currently lives in Johnson Creek, Wisconsin, with his wife Kat, and his son Ray IV. They are known to spend long stretches of time in Thailand (especially in the Udon Thani area) where a portion of this book was written.

“Nicholus does a beautiful job of presenting actions that can be done with the jQuery library, and showing source code to complete the same actions without jQuery. … This book is worth reading by anyone who’d like an overview of the plumbing behind jQuery, or who wants to dive into ways of accomplishing tasks with jQuery.” (Computing Reviews, September, 2017)