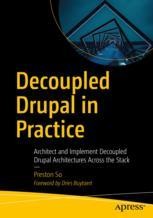 Architect and Implement Decoupled Drupal Architectures Across the Stack

Gain a clear understanding of the most important concepts in the decoupled CMS landscape. You will learn how to architect and implement decoupled Drupal architectures across the stack—from building the back end and designing APIs to integrating with front-end technologies.  You'll also review presenting data through consumer applications in widely adopted technologies such as Angular, Ember, React, and Vue.js.

Featuring a foreword by Drupal founder and project lead Dries Buytaert, the first part of this book chronicles the history of the CMS and the server–client divide, analyzes the risks and rewards of decoupled CMS architectures, and presents architectural patterns. From there, the book explores the core and contributed landscape for decoupled Drupal, authentication mechanisms, and the surrounding tooling ecosystem before delving into consumer implementations in a variety of technologies. Finally, a series of chapters on advanced topics feature the Drupal REST plugin system, schemas and generated documentation, and caching.

Several projects point to a decoupled future for Drupal, including the Contenta CMS and work to modernize Drupal's JavaScript using React. Begin learning about these and other exciting developments with Decoupled Drupal today.

Those with some exposure to CMSes like WordPress and Drupal and those who wish to follow along with JavaScript application development will benefit.  A familiarity with API-first or services-oriented architectures is helpful but not presumed.

Preston So has been a web developer since 2001, a Drupal developer since 2007, a Drupal contributor since 2009, and a globally recognized expert on decoupled Drupal since 2015. Currently, he works as Director of Research and Innovation at Acquia, where he is the primary subject matter expert and evangelist for decoupled Drupal and API-first approaches. Previously, he led the Entertainment Weekly development team at Time Inc. (now Meredith). Over the last decade, he has given talks at over 50 conferences on five continents in multiple languages on a variety of topics, including front-end development, responsive design, user experience, Drupal development, open-source innovation, emerging technologies (conversational interfaces, augmented reality), the decentralized web, and decoupled Drupal. He has presented at SXSW Interactive twice (2017, 2018) and at industry conferences around the world, including Frontend United, Great Wide Open, and others. He has also delivered keynotes at conferences on four continents in multiple languages on the subject of decoupled Drupal.