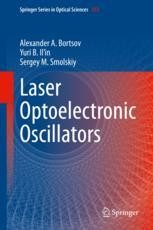 This book is devoted to the theoretical and experimental investigation of the optoelectronic oscillator (OEO) with direct and external modulation of laser emission. Such devices, sources of precision radio frequency oscillations using laser excitation, are novel and technologically relevant, with manifold possible applications. The book includes a review of the present state of the theory and generation techniques in microwave and mm-wave ranges for traditional and optoelectronic oscillators, description of OEO construction and operation principles, theoretical oscillation analysis and mathematical description of the relevant semi-classical laser physics, and investigation of the power spectral density of noises. Technical features and advantages of OEOs with external and direct modulation of laser emission are discussed together with functional diagrams. The characteristics of OEOs are compared with other traditional RF oscillators, such as quartz, surface acoustic waves, and oscillators with electromagnetic wave cavities. Special attention is paid to Q-factors and phase noises of RF carriers at small offsets. The authors discuss the technical characteristics of modern optoelectronic methods for precision RF oscillation formation, such as commercial large-dimension and compact quantum frequency standards with optical pumping on cesium and rubidium cells. This book is aimed at scientists and engineers in academia and industry who work with sources of microwave and mm-wave signals.

Alexander A. Bortsov was born in Moscow, completed his Ph.D. in Engineering, and graduated from MPEI. His Ph.D. thesis was on the theme “Optoelectronic oscillator with the QW laser diode” in 2005. He is the author of more than 40 scientific publications, among them 30 scientific papers, one book Quantum Opto-Electronic Oscillator, 3 USSR copyright certificates on invention, 4 Russian patents, and more than 20 technological reports on various conferences, including international ones. He was the first in Russia, who in 2004–2005 had got the generation of the optoelectronic oscillator with direct modulation in the microwave range (more than 8 GHz) and investigated of it experiment tally and theoretical in his Ph.D. thesis (2005). He is the first researcher in Russia in 2008–2009 to investigate the opto-electronic oscillator with the Mach–Zehnder modulator in the microwave range 8–10 Ghz. He delivers lectures to students on the fundamentals of the quantum electronics and quantum physics. He trains students in the probabilities theory, mathematical statistics, and many areas of the higher mathematics including mathematical methods of modeling in the MatLab system. Fields of current research: opto-electronic oscillator, photonics, lasers, QW lasers, phase noise, the probabilities theory, mathematical statistics, calculation methods in MatLab.

Yuri B. Il’in, born in 1939, Ph.D. in Engineering. Professional education: Moscow State Mining University, Electromechanical Faculty (1958–1959)/Moscow Power Engineering Institute (National Technical University), Radio Engineering Faculty (1959–1964)/Moscow State University, Faculty of Mechanics and Mathematics (1964–1968). He graduated from Radio Engineering Faculty of MPEI since 1964 just after graduation before he left this institute of his own accord in 1997. At the beginning, he worked on Department of Radio Transmitting Devices, where engaged in the construction of masers, and theoretical study of steadystate and dynamic behavior of a multimode lasers with non-homogeneously broadened spectral line and practical questions of development of fiber-optic communication lines. After graduation of Ph.D. course and defending a Ph.D. thesis in 1986, he worked on Department of Performing of Oscillations and Signals in Radio Engineering Faculty of MPEI. At the same time, he was with SIMVOL Ltd. Company in Moscow, Russia. Here he led the pioneering works on the creation of Optoelectronic Oscillators and Magneto-Infrared Laser Diode Therapeutic devices. Since 1997, he was with OPTEN Ltd. Company in Moscow, Russia. Here he worked as a Department of Education Programs manager until 2005. At the same time, he was engaged in creating, organizing, and conducting courses in Russia and the United States of America (USTTI) of advanced training for senior engineering personnel of electric power companies in Russia and a number of countries. These courses were devoted to the technology of laying fiber-optic communication cables overhead the phase wires of long-height high-voltage power lines. From 2005 to the present time he works as a freelancer scientist. His academic experience spans over 30 years. He worked as assistant professor, senior teacher and associate professor.

Sergey M. Smolskiy, born in 1946, Ph.D. in Engineering, Dr.Sc. in Engineering, full professor of Department of Radio Signals Formation and Processing of the National Research University “MPEI.” He was engaged in theoretical and practical problems concerning the development of modern transmitting cascades including the short-range radar. In 1993, he defended the Doctor of Science thesis and now he works as a professor of Radio Signals Formation and Processing Dept. His academic experience spans over 40 years. The list of scientific works and inventions contains over 358 of scientific papers, 20 books, more than 100 technological reports on various conferences, including international ones. He is an active member of International Academy of Informatization, International Academy of Electrotechnical Sciences, International Academy of Sciences of Higher Educational Institutions, and IEEE. The scientific work for the latter 15 years is connected with conversion directions of short-range radar systems, radio measuring systems for fuel and energy complex, radio monitoring system, radar technology, radio transmitters, radio receivers, etc.