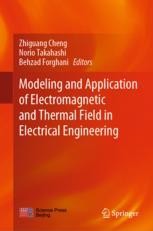 Modeling and Application of Electromagnetic and Thermal Field in Electrical Engineering

Co-authored by an international research group with a long-standing cooperation, this book focuses on engineering-oriented electromagnetic and thermal field modeling and application. It presents important contributions, including advanced and efficient finite element analysis used in the solution of electromagnetic and thermal field problems for large and multi-scale engineering applications involving application script development; magnetic measurement of both magnetic materials and components under various, even extreme conditions, based on well-established (standard and non-standard) experimental systems; and multi-level validation based on both industrial test systems and extended TEAM P21 benchmarking platform. Although these are challenging topics, they are useful for readers from both academia and industry.

Zhiguang Cheng was born in Hebei, China, in 1942. He graduated from Peking University in 1967 and received a Ph.D. degree from Tsinghua University in 1995. He was a vice chief engineer of the R & D Center, Baoding Tianwei Group, and is currently a research advisor, senior EM expert, Baoding Tianwei Baobian Electric Co., Ltd. He has received the National and Ministerial Science and Technology awards for his contributions to engineering science research and application. He is a senior member, IEEE, and a founding member of the International Compumag Society. His major interests are engineering electromagnetic field analysis, benchmarking, magnetic material modeling and industrial applications. He has led his group to establish the international TEAM P21 family of benchmark problems, which is well recognized worldwide.

Norio Takahashi was born in Hyogo, Japan, in 1951. He received a B.E. degree from Okayama University in 1974 and M.E. and Ph.D. degrees from Kyoto University in 1976 and 1982, respectively. He was a professor of Department of Electrical and Electronic Engineering, Chair of Electromagnetic Device Laboratory of Okayama University, Vice President of Power and Energy Society, IEE of Japan, Vice President of International Compumag Society, and IEEE Fellow. His major interests were the development of numerical methods for calculating magnetic fields and optimal design methods for magnetic devices. Professor Norio Takahashi passed away, and received the 2013 Nikola Tesla Award for his contributions to finite element modeling, analysis and optimal design tools of electrical machines, sponsored by the Grainger foundation and IEEE Power and Energy Society.

Behzad Forghani was born in Tehran, Iran, in 1957. He received a B. Eng. degree in 1980 and a M. Eng. degree in 1981, both in Electrical Engineering, from McGill University in Montreal, Canada. Since 1981, he has been working at Infolytica Corporation, and then Mentor Infolytica, a Siemens Business, in the field of Computational Electromagnetics and is currently a Product Line Director. He is a senior member, IEEE, and a founding member of the International Compumag Socienty. He is a member of OIQ (Order of Engineers in Quebec). He regularly serves on the Editorial Boards of Compumag and CEFC (two conferences with focus on the electromagnetic field computation) and is a Board Member of the International Compumag Society. His areas of interest are numerical techniques, material modeling, applications/devices and coupled problems.