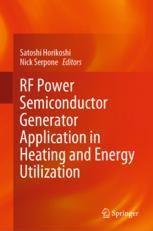 This is a specialized book for researchers and technicians of universities and companies who are interested in the fundamentals of RF power semiconductors, their applications and market penetration.Looking around, we see that products using vacuum tube technology are disappearing. For example, branch tube TVs have changed to liquid crystal TVs, and fluorescent light have turned into LED. The switch from vacuum tube technology to semiconductor technology has progressed remarkably. At the same time, high-precision functionalization, miniaturization and energy saving have advanced. On the other hand, there is a magnetron which is a vacuum tube device for generating microwaves. However, even this vacuum tube technology has come to be replaced by RF power semiconductor technology. In the last few years the price of semiconductors has dropped sharply and its application to microwave heating and energy fields will proceed. In some fields the transition from magnetron microwave oscillator to semiconductor microwave oscillator has already begun. From now on this development will progress remarkably.
Although there are several technical books on electrical systems that explain RF power semiconductors, there are no books yet based on users' viewpoints on actual microwave heating and energy fields. In particular, none have been written about exact usage and practical cases, to answer questions such as "What are the advantages and disadvantages of RF power semiconductor oscillator?", "What kind of field can be used?" and the difficulty of the market and application. Based on these issues, this book explains the RF power semiconductors from the user's point of view by covering a very wide range of fields.

Satoshi Horikoshi, Sophia University, Department of Materials and Life Sciences (Associate Professor). Microwave Science Research Center MSRC (Director). Satoshi Horikoshi received his Ph.D. degree in 1999, and was subsequently a postdoctoral researcher at the Frontier Research Center for the Global Environment Science (Ministry of Education, Culture, Sports, Science and Technology) until 2006. He joined Sophia University as Assistant Professor in 2006, moved to Tokyo University of Science as Associate Professor in 2008, after which he returned to Sophia University, again as Associate Professor, in 2011. Currently he is Director of the Japan Society of Electromagnetic Wave Energy Applications (JEMEA), and is on the Editorial Advisory Board of the Journal of Microwave Power and Electromagnetic Energy a well as three other international journals. His research interests involve new functional material or nanomaterial synthesis, molecular biology, the formation of sustainable energy, and environmental protection using microwave-energy and/or photo-energy. He has co-authored over 190 scientific publications and has contributed to, and edited or co-edited, 23 books.
Nick Serpone, Ph.D., F. EurASc. Visiting Professor, PhotoGreen Laboratory, Dipartimento di Chimica, Universita di Pavia, Italia.  Nick Serpone is Professor Emeritus (Concordia University, Montreal, Canada), and since 2002 has been a Visiting Professor at the University of Pavia (Italy). He was also a Visiting Professor at the Universities of Bologna and Ferrara (Italy), École Polytechnique Fédérale de Lausanne (Switzerland), École Centrale de Lyon (France), and Tokyo University of Science (Japan), and a Guest Lecturer at the University of Milan (Italy). He was Program Director at the National Science Foundation (Washington, USA) and consultant to the 3M Company (USA). He has co-edited/co-authored several books, contributed 23 chapters to books, and published over 450 articles. His principal interests have focused on the photophysics and photochemistry of coordination compounds and metal-oxide semiconductors, environmental remediation, and microwave chemistry. He is a Fellow of the European Academy of Sciences (EurASc) where he is currently Head of the Materials Science Division.