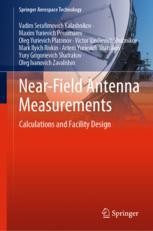 This book is useful both for those who want to get initial information on the measurement of the antenna parameters, and for specialists directly involved in the experimental determination of the antenna parameters from the results of measuring the amplitude-phase distribution in the near zone of the antennas. Currently, the near-field method is the most common one for antenna measurements. In most books, an academic approach is given to the issue under consideration and it is difficult to use them for the direct organization of measurements. In many others, specific narrow issues are considered that are accessible to understanding only by highly qualified engineers/readers. The purpose of this book is to get rid of the above disadvantages by offering the reader a more accessible exposition and formulas by which appropriate computer programs can be written with minimal effort. The contents of this book allow interested specialists to be not only users of the near-field measuring facilities, but also help in understanding the principles of their work. This book is intended for engineers and specialists whose activities are related to experimental testing of radio characteristics of complex antenna systems, especially near-field measurements, and is also useful as a textbook for senior students in the field of “radioelectronics” and “radiophysics.”

Vadim Serafimovich Kalashnikov, Professor, Doctor of Technical Sciences is currently Professor at the Saint Petersburg State University of Aerospace Instrumentation. He is the author of 2 monographs, 14 patents and more than 80 scientific papers. His research interests are in the area of design of antenna systems, radio thermal measurements, measurements of antenna parameters and the radio characteristics of the “antenna – radio-transparent radome” systems.

Maxim Yurievich Ponomarev, graduated from the Saint Petersburg University in 2005. His research interests are in the area of near-field antenna measurements and automation of control processes.

Oleg Yurievich Platonov obtained his Ph.D. from the Saint Petersburg State University of Aerospace Instrumentation. His research interests are in the area of design of control systems and antenna measurements at near-field facilities.

Victor Vasilievich Shubnikov obtained his Ph.D. from the Saint Petersburg Electrotechnical University 'LETI'. His research interests are in the area of near-field antenna measurements and parallel computing.

Mark Ilyich Rivkin, Ph.D., is a specialist in the areas of radar, radio navigation, antenna systems and antenna measurements. He is the author of 3 monographs and 10 patents for inventions in the fields of antenna-feeder systems and measurements of antenna parameters.

Artem Yurevich Shatrakov, Dr of Economics, PhD of Technical Sciences, Professor, General Director of  Promtechaero.  Author of more than 200 scientific articles on the development of radio engineering enterprises.  Received more than 20 patents for technical inventions.  The main focus of scientific activity is the development and introduction into serial production of automated systems and means of controlling air traffic, radio navigation and aircraft landing.

Yury Grigorievich Shatrakov, Dr of Technical Sciences, Professor, Honored Worker of Science of Russia, Laureate of State Prizes, full member of the Russian Academy of Technological Sciences.  He has been working in the field of “Air Navigation” since 1963 in the following directions: ground and airborne radio navigation systems, instrumental landing systems, secondary radars, air traffic control systems, training and modeling complexes.  He wrote more than 400 scientific articles and prepared more than 100 Drs and PhDs.

Oleg Ivanovich Zavalishin is expert on the development and production of aeronautical equipment, land and aircraft equipment, land systems as a functional addition to global satellite navigational systems, local differential systems and landing radio-radar equipment for civil aviation. He is also a member of the council of chief designers, developers and producers of navigational hardware (NAP) for the GNSS.