A Brief Primer to the Internet of Things

Simply put, the Internet of Things refers to devices that collect and transmit data over the Internet. These devices can be anything from your toaster or washing machine to your cell phone or wearable devices such as the Microsoft Band, Apple Watch, or Fitbit, just to name a few. It is said that if a device has an on/off switch, generates data, and can connect to the Internet, chances are that it can be part of the IoT. Today, many cars are connected to the Internet. By 2020, it is estimated that over 250,000 cars will be connected to the Internet. The wearable device market grew 223% in 2015 globally. Many companies are investing in home devices, such as Samsung. It is estimated that by “connecting” kitchens to the Internet, the food and beverage industry could save as much as 15% annually. According to some estimates, the Internet of Things will add $10-$15 trillion to the global GDP in the next 20 years.

Other popular devices that are used today to generate data are the low cost, credit card-sized computers such as the Raspberry Pi, Pi Zero, and Tessel IO boards. These little devices are frequently used to create and generate data in places and situations where normal PCs and laptops can’t go or aren’t efficient enough. In fact, it is these devices that will be used in this book to generate data.

However, even though the term Internet of Things was coined in 1999, the concept of collecting and transmitting data goes back earlier than that. ATMs did it as far back as 1974. Still, with the recent movement and excitement around big data and IoT, IoT is still a new concept to a lot of people.

The term “Internet of Things” was coined by the guy who helped create RFID, Kevin Ashton. In fact, it was lipstick that ultimately led to the coining of the IoT term. At the time, Kevin was employed at Procter & Gamble as the Oil of Olay lipstick brand manager, and he noticed that a popular color of their lipstick was continually out of stock. Kevin decided to find out why and in digging into the problem he discovered that there was a data problem between the Procter & Gamble stores and the supply chain. The solution he came up with led him to drive the development and deployment of RFID chips on inventory. Kevin asked himself “What if I took the radio microchip out of the credit card and stuck it in my lipstick? Could I then know what was on the shelf, if I had this shelf talk to the lipstick?”

There are several key factors that are helping drive the IoT space, and one is the inexpensive costs of the components. For example, both the Raspberry Pi and Tessel IO board are less than $40, and the associated sensors and modules, such as GPS, accelerometer, climate, and ambient modules, are even less. Each of these credit card-sized boards is powerful enough to run advanced software, such as Windows 10 Core.

There are other boards as well, including ones from Intel and Arduino. Chapter 2 will cover these boards. Another factor is the advancement in software that provides rich, dynamic, and high-level data processing and analysis capabilities. The software is becoming more powerful and easy to use, providing the ability to deliver the high-level and enterprise-class analytics big data solutions need.

Lastly, a major key factor in the explosion of IoT scenarios has been the rapid advancement in cloud services and technologies, providing a highly cost-effective solution for data storage, processing, and analysis. Coupled with the fact that the current development tools and technologies used on-premises also work when developing for the cloud makes using cloud-based services and solutions highly advantageous. 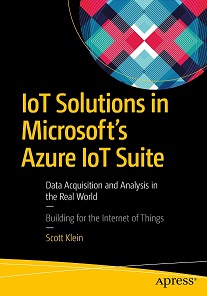 Scott Klein is a Microsoft Data Platform Technical Evangelist who lives and breathes data. His passion for data technologies brought him to Microsoft in 2011 and has allowed him to travel all over the globe evangelizing SQL Server and Microsoft’s cloud data services. Prior to Microsoft, Scott was one of the first four SQL Azure MVPs. Scott has authored several books that talk about SQL Server and Azure SQL Database, and continues to look for ways to help developers and companies grok the benefits of cloud computing. He also thinks “grok” is an awesome word. Scott’s fascination with data and the growth of Big Data and the Internet-of-Things (IoT) technologies has led him to the fantastic world of data discovery and data analytics.