In this blog post, I will focus on using Azure and Xamarin Forms together. Most times when creating apps, I want to target multi-platforms including iOS, Android and Windows, as well as, use storage in the cloud for data and expose the data through a web service. In the Azure portal, this is facilitated by creating a Mobile App with Step 1 to create a database for your app. Step 2 is to serve up data in a service for the Xamarin Forms app to consume. And Step 3 is to consume the service from Azure in a Xamarin Forms app and display the data! I have just described the Azure Mobile App Xamarin Forms Quick Start. It is my new “file new” when creating cross platform apps for iOS, Android and Windows.

To create a Mobile App in the Azure portal at http://portal.azure.com, select + Create a resource, Web + Mobile and then Mobile App as shown in Figure 1.

Figure 1. In the Azure portal, create a Mobile App.

Once the Mobile App is deployed, on the app service blade, select Quickstart and Xamarin Forms as show in Figure 2. 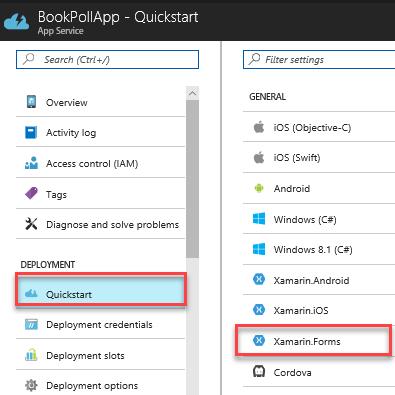 Then just follow the 3 steps and show in Figure 3. Complete each step before moving on to the next step. Step 2 can be done using either C# or Node.js. 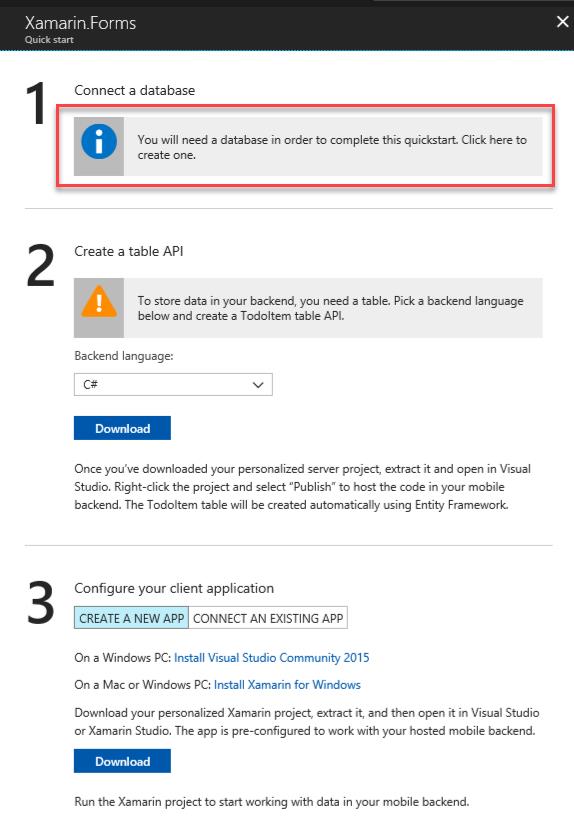 Once completed, you will have all of the plumbing done that wires up a Xamarin Forms app to a service that uses an Azure SQL Database. See figure 4 for the Xamarin Forms App.

Russell A Fustino is CEO of Fustino Brothers, Inc, makers of the Endorsed Jethro Tull App, and a Microsoft MVP in App Development as well as a Windows Developer at Directorpoint. He is a former developer evangelist for Microsoft, Russ’ ToolShed, Xamarin, Raygun & ComponentOne as well as a former Azure Senior Cloud Solutions Architect for Opsgility. He is highly experienced in developing cross platform apps using Xamarin and C# for UWP, Android and iOS. Russ is a Xamarin Certified Mobile Developer software developer with a passion for conveying relevant, current, and future software development technologies and tools through live seminars, teaching, and internet video productions. Russ has enlightened, entertained and educated over 1 million developers and is a recipient of the INETA Lifetime Achievement award. Russ heads up a user group in the Tampa Florida area: Mobile Application Dev Tampa (www.MADTampa.com). Russ is also the local PC Handyman for his community fixing virus problems and providing tune-ups for his neighborhood and helping folks that have been scammed on their PC. Please like on Facebook and follow on Twitter: @FustinoBrothers and @RussFustino to keep tabs on him.