Making Sense of Sensors – Types and Levels of Recognition

There are multiple types of sensors, ranging from inertial to proximity/location to audio/visual. Let’s go over the three types of sensors (inertial, audio and visual) and describe how they generally work.

The accelerometer is the best place to start understanding inertial measurements. An accelerometer essentially measures the force (proper acceleration) along each axis. Typically, such devices are referred to as 3-axis accelerometer since they provide force along x, y and z-axes. A gyroscope helps determine orientation by measuring rotation across a given axis. Figure 1 provides an illustration of the accelerometer and gyroscope data capture. The two together can provide acceleration and orientation and may be referred to as a 6-axis sensor. Depending on the usage model, data from these sensors are typically captured at rates ranging from few Hz to KHz. Raw data from an accelerometer/gyroscope is typically noisy and the use of filters is common to ensure that these are smoothened based on multiple data points. Such sensors can be applied for a wide variety of use cases, examples below:

The typical audio sensor used in most devices is a standard microphone. Microphones convert sound to electrical signals and are prevalent in many applications ranging from the typical public addressing systems to movies to laptops to mobile, wearable, and IoT devices. In this section, we primarily focus on the microphones used in lower-end devices for IoT and wearable applications. Most of the microphones used in these devices are MEMS (microelectromechanical systems) sensors and are likely to be analog or digital. The output of the microphone is typically pulse-density modulated (PDM) or pulse code modulated (PCM) and data is captured from 4-bit to 64-bit and can be tuned for signal-to-noise ratio and quality of the capture. The typical frequency response of microphones range from 20Hz to 20KHz. To improve the quality of the recording and recognition, sometimes two or three microphones are used in mobile phones, for example. This allows for processing the data from each of these microphones and reducing the noise to deliver higher quality output (e.g. voice clarity when making a phone call).

Audio sensors are used for not only capturing and recording content, but also for audio classification and speech recognition (see Figure 2). Here are some of the predominant usage scenarios for single or multiple microphones in mobile, wearable, and IoT systems: 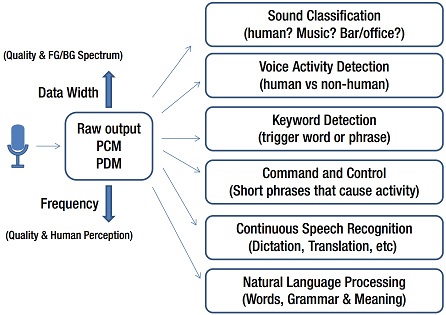 Building on the above techniques, applications that are more interesting and capabilities that may be of potential interest to the reader are natural language processing and language translation capabilities. These capabilities are now emerging in different market solutions.

The most common visual sensor is the camera. Cameras are well understood since they have been around for ages for photographic purposes. In this book, we focus on their use as a visual sensor to recognize what a device can automatically see, understand and act upon.

Unlike inertial and audio data, visual data introduces a spatial dimension to the data, since it can be 2D or 3D in nature. A camera can be used for instantaneous 2D capture (still image) without any temporal information, or as part of a video capture with rich temporal data capturing multiple frames over time. Generally, data can be captured at extremely low fidelity (e.g., QVGA that is 320x240 as a still image or at few frames per second) to high fidelity (e.g. HD and 4K at 30 or more frames per second). The capture rate depends on the usage model that needs to consider whether human consumption (as in replay) is the key requirement or whether only machine recognition of some visual aspect is sufficient

Visual recognition can be used for many different purposes ranging from object recognition, face recognition and scene recognition to similarity/anomaly detection, understanding motion or scale, and video summarization. Some examples of these are provided in Figure 3 and are listed below for illustration: 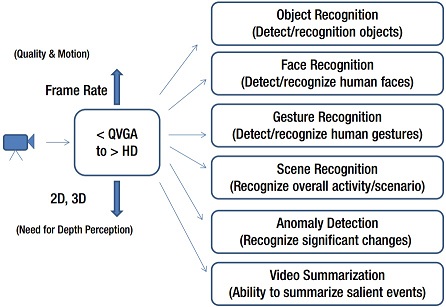 It should also be noted that the inertial, audio, and video sensors and recognition techniques can be used in conjunction for multi-modal recognition.

Pick up Omesh Tickoo's book, Making Sense of Sensors, to learn more about studying the recognition techniques for each independently with accompanying examples of combining them together. 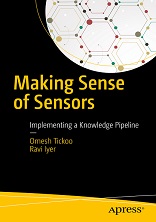 Omesh Tickoo is a research manager at Intel Labs. His team is currently active in the area of knowledge extraction from multi-modal sensor data centered around vision and speech. In his research career Omesh has made contributions to computer systems evolution in areas like wireless networks, platform partitioning and QoS, SoC architecture, Virtualization and Machine Learning. Omesh is also very active in fostering academic research with contributions toward organizing conferences, academic project mentoring and joint industry-academic research projects. He has authored 30+ conference and journal papers and filed 15+ patent applications. Omesh received his PhD from Rensselaer Polytechnic Institute in 2015.