Modeling the Solar System with the Canvas Element

You can use the canvas element in HTML5 to create some fun graphics. Canvas is very different from SVG – the main thing is that canvas is completely implemented in JavaScript. The only part that is in the markup is a simple element definition like this:
<canvas id="myCanvas" width="400" height="400">
Canvas is not supported on this browser
</canvas>

Instead, you’ll define the content by calling the various drawing methods using JavaScript. Just like with the audio and video elements, the markup within the canvas element is used when the browser does not support canvas. You can use this to provide the appropriate fallback content.

In this article, you’ll draw a moving model of the solar system. For the sake of time, you’ll show only the earth, sun, and moon. This implementation will take advantage of these two important features of canvas:

The only simple shape that canvas supports is the rectangle. For all other shapes you must define a path. The basic approach to defining paths in canvas is similar to SVG. You use a move command to set the starting point and then some combination of line and curve commands to draw a shape.

In canvas, you always start with a beginPath() command. After calling the desired drawing commands, the path is completed by calling either stroke() to draw an outline of the shape or fill() to fill in the shape. The shape is not actually drawn to the canvas until either stroke() or fill() is called. If you call beginPath() again, before completing the current shape (with a call to stroke() or fill()), the canvas will ignore the previous uncompleted commands. The same strokeStyle and fillStyle properties that you used with rectangles also define the color of the path.

The actual drawing commands are as follows:

In addition, these functions can be used for drawing:

However, this is still treated as a path; you need to first call beginPath(), and the arc is not actually drawn until you call either stroke() or fill().

The arc() command is one that you’ll likely use a lot and will be important in this example. The arc()

The first two parameters specify the x and y coordinates of the center point. The third parameter specifies the radius. The fourth and fifth parameters determine the starting and ending points of the arc. These are specified as an angle from the x-axis. The 0° angle is the right side of the circle; a 90° angle would be the bottom edge of the circle. The angles are specified in radians, however, not degrees.

As I mentioned earlier, a canvas element uses a grid system where the origin is at the top-left corner of the canvas. So, a point at 100, 50 will be 100 pixels to the right and 50 pixels down from that corner.

Transformations simply adjust the grid system. For example, the following command will shift the origin 100 pixels to the right and 50 pixels down:

This is illustrated in the following figure: 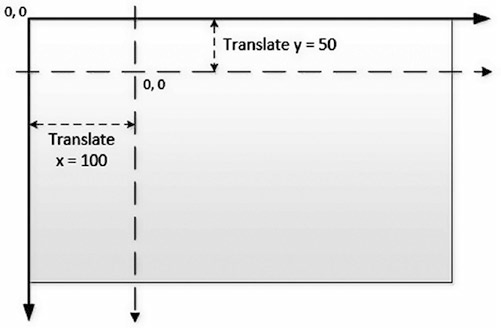 Now when you move to 10, 20, since this is relative to the new origin, the actual position (relative to the canvas), will be 110, 70. You might be wondering why you would want to do this. Well, suppose you were drawing a picture of the U.S. flag, which has 50 stars on it. A five-pointed star is a fairly complex shape to draw, which will require a number of drawing commands. Once you have drawn the first star, you’ll need to repeat the process 49 more times, each time using different values.

By simply translating the context to the right a little, you can repeat the same commands using the same values. But now the star will be in a different location. Granted, you could accomplish the same thing by creating a drawStar() function that accepted x, y parameters. Then call this 50 times, passing in different values. However, once you get used to using transformation, you will find this easier, especially with the other types such as rotation. 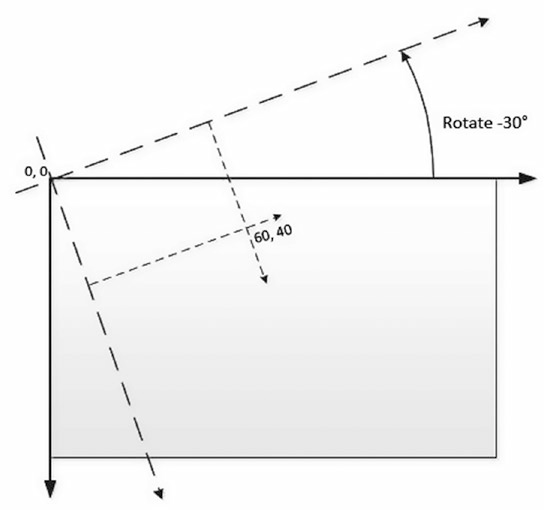 Note: I indicated the rotation angle as 30° since that is what most people are familiar with. However, the rotate() command expects the value in radians. If your geometry is a little rusty, a full circle is 360° or 2π radians. In JavaScript, you can use the Math.PI property to get the value of π (pi). For example, 30° is 1/12 of a full circle, so you can write this as (Math.PI*2/12). In general, radians are calculated as degrees * (Math.PI/180).

You can use multiple transformations. For example, you can translate the origin and then rotate the x- or y-axis. You can also rotate the grid some more and translate again. Each transformation is always relative to the current position and orientation.

The state of a drawing context includes the various properties such as fillStyle and strokeStyle that you have already used. It also includes the accumulation of all transformations that have been applied. If you start using multiple transformations, getting back to the original state may be difficult. Fortunately, the drawing context provides the ability to save and then restore the state of the context. 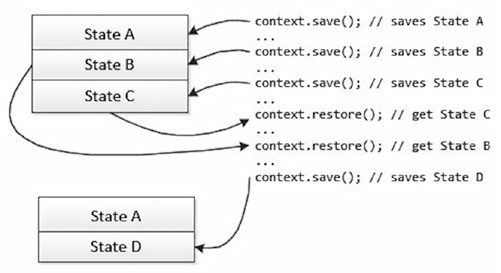 You should generally save the state before doing any transformations, especially complex ones. When you have finished drawing whatever elements needed the transformation, you can restore the state to the way it was. Remember, changing the state by setting the fillStyle or performing a transformation does not affect what has already been drawn.

With these features at your disposal, let’s draw a simple model of the solar system.

Mark Collins has been developing software solutions for over 30 years. Some of the key technology areas of his career include COM, .NET, SQL Server, and SharePoint. He currently supports a large non-profit organization, serving as data architect and back office automation and integration specialist. You can see more info at his company TheCreativePeople.

Want more? This article is excerpted from Pro HTML5 with CSS, JavaScript, and Multimedia by Mark Collins, ISBN 978-1-48422-462-5. Get your copy today and learn how to build modern interactive websites including many more examples demonstrating fundamentals and advanced features.