Secular Trends for the Cloud

The third quarter of 2016 server market report by IDC has not been kind to purveyors of server technology. Among the major OEMs, whose deliveries are heavily weighted toward the traditional enterprise data center, most suffered year over year declines, from -7.4 percent by Lenovo to a whopping 32.9 percent by IBM. The lone exception was Cisco, which managed to edge up its revenue by 4.8 percent. However, most notable is the segment named “ODM Direct”, which edged up 6.8 percent in a difficult year of economic turmoil.

We would like to think that these results are consistent with a secular trend that goes back to the start of the standard high volume (SHV) server market in the early 1990s. There are two significant milestones in this timeline, where industry watchers thought would mar an enduring collapse for server demand. The first milestone was the turn of the millennium, when the Y2K problem became a nonevent. Defensive purchases to ward against this event stopped. At the same time the dot com bubble burst, amplifying the reduction in demand. Other than the heavy casualties among the dot com companies, the industry was remarkably resilient to these events and demand recovered rather quickly.

A second event seems to have had a more lasting effect, namely the mortgage banking crisis of 2007-2008. By 2016 a trend was clear, where the number of servers deployed in enterprise data centers has been veering between flat to somewhat descending. Translating these numbers into actual revenue make results look even worse. A graph adapted from an LBNL report  (A.  Shehabi, S. Smith et al., Data Center Energy Usage Report, Lawrence Berkeley National Laboratory Report #LBNL-1005775, US Dept. of Energy, June 2016) captures this trend, illustrated in the “Wave 1” solid line. However, this report notes that except for a few blips during the crisis itself, the upward trend in demand has continued. There is new demand from servers deployed in cloud data centers, both by cloud service providers and by private cloud deployments in enterprise data centers as a natural follow up from server consolidation exercises from 2003 to 2007.

Considering these secular trends, large OEMs sell to the cloud segment, but are heavily weighted toward the traditional enterprise market, to the point that most participants showed a decline last year.  In contrast, OEM direct providers are heavily weighted toward serving in house platforms, mainly platforms deployed by the largest cloud providers (CSPs). These include Amazon, Google, Facebook and Microsoft in the US and Tencent, Alibaba and Baidu in the People’s Republic of China. Cloud demand is shown in the gray shaded area directly above the enterprise demand, which is still significant, although with little growth in the long term. Wave 2 demand comprises the demand from the large CSPs. Wave 3 represents the demand from smaller cloud service providers, which currently is small relative to wave 2 demand.

There is a second silver lining to this dynamic: IoT is not only about edge devices that get the lion share of the industry’s attention. Depending on their growth rate, infrastructure cloud services for IoT can add a significant boost to the already healthy cloud demand in the next few years, with a corresponding increase in demand in data center infrastructure.

We will discuss strategic implications under this ecosystem for platform  and service providers in the next few entries. Some of these considerations are discussed in the book “Cloud as a Service: Understanding the Service Innovation Ecosystem”, published by Apress. The ISBN-13 for this book is 978-1484201046. 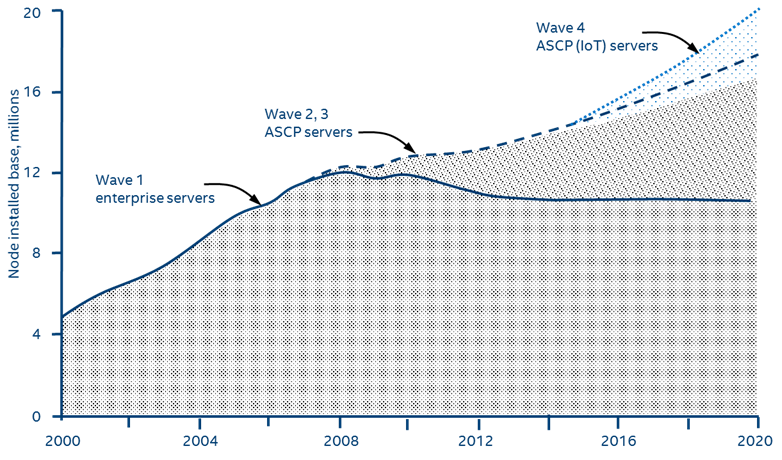 Enrique Castro-Leon is an Enterprise Architect and Technology Strategist with the Intel Architecture Group at Intel Corporation working in enterprise IT solution integration, cloud computing and service engineering. As a technology strategist Enrique has been investigating the disruptive effects of emerging technologies in the marketplace. He is the lead author of a book on the convergence of virtualization, service oriented methodologies and distributed computing titled The Business Value of Virtual Service Grids: Strategic Insights for Enterprise Decision Makers. He is also the lead author of a second book, Creating the Infrastructure for Cloud Computing: An Essential Handbook for IT Professionals. Enrique holds Ph.D. degree in Electrical Engineering and M.S. degrees in Electrical Engineering and Computer Science from Purdue University, and a BSEE degree from the University of Costa Rica.

Want to learn more? Find more in depth information in Cloud as a Service: Understanding the Service Innovation Ecosystem by Enrique Castro-Leon and Robert Harmon.