Selling in World Markets—The Challenge Ahead

America cannot grow its economy, foster entrepreneurship, or lift the wages and incomes of its workforce unless small and medium-size businesses reach beyond U.S. borders and sell products and services to the vast marketplace that lives outside the United States. Despite complaints about trade imbalances, effects on domestic economies, currency upheavals, and loss of jobs, the reality of goods and services continually crossing borders will not go away. International trade will continue to be the engine that runs most nations. 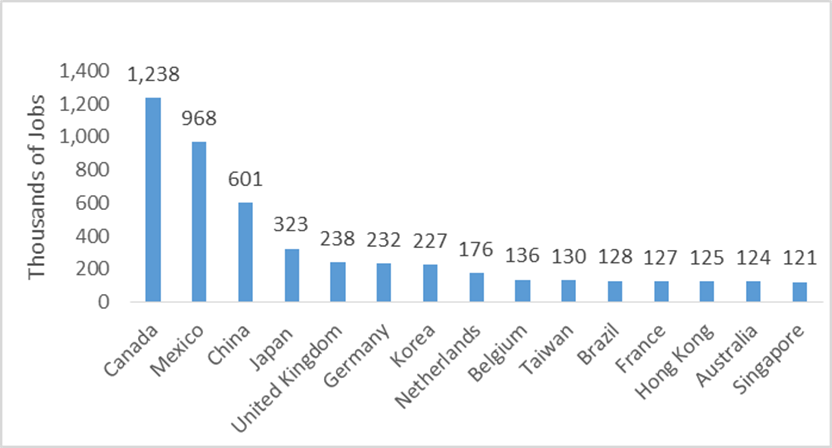 In April 20163, the International Trade Administration reported an estimated 11.5 million jobs were supported by exports. The Bureau of Economic Analysis’ (BEA) most recent data indicates the United States exported services to over 70 countries in 2015 with exports to the United Kingdom outnumbering those to Canada, China, Japan and Ireland. BEA 2015 data indicates these top 15 destinations supported 3.1 million American jobs or 65 % of the total as presented in Figure 1-2.4 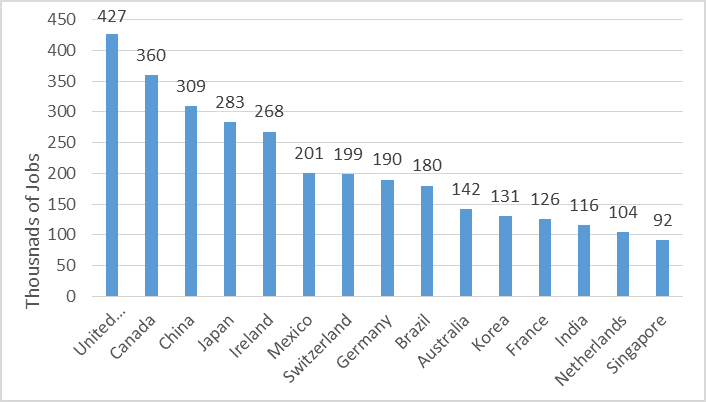 Clearly, on the basis of this government data, American exporting is important and demonstrates a need to improve. As our economy recovers from the Great Recession, U.S. businesses can rely on exporting to realize their growth potential. The U.S. Department of Commerce International Trade Administration (ITA) has many programs supporting small- and medium-sized enterprises in developing that potential. Its programs include business counseling offered at home through a network of over 100 U.S. Export Assistance Centers and overseas through commercial officers based in more than 50 U.S. embassies. The ITA also has offices that campaign for U.S. commercial policy interests in bilateral and multilateral settings. These office handle business regulation and product standards in addition to protecting and enforcing intellectual property rights and issues that affect U.S. exports.

The challenges that now lie ahead for U.S. businesses selling in the world market—from slowing markets to regulatory and other barriers—make international trade (i.e., growing our global markets) more crucial than ever to ensuring future international business success.

Doctor and Business Development/Contracts Management Executive, Hopkins is the author of several articles in refereed marketing/international marketing journals. Working in the fields of international procurement and contract administration, he has purchased aircraft parts and structures from South Korea and Japan, and negotiated the execution and administration of contracts for the sale of aircraft, upgrades, structures and parts to the US government and customers in Southeast Asia (Japan, South Korea), South America (Colombia) and Europe (Denmark, United Kingdom).

This article is excerpted from Grow Your Global Markets: A Handbook for Successful Market Entry by Raymond Hopkins.

1. U.S. Department of Commerce. Census Bureau and the U.S. Bureau of Economic Analysis Report no. CB 17-64/BEA 17-21 U.S. International Trade in Goods and Services, March 2017 released May 4, 2017 retrieved from: https://www.bea.gov/newsreleases/international/trade/tradnewsrelease.htm