Apress authors Joan Horvath and Rich Cameron blog about the power of 3D printing in education in the Scientific American Blog. You can find the original blog post here. 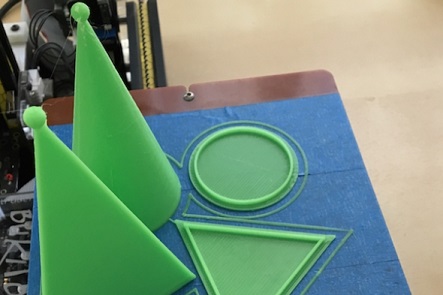 Blind students learn visual concepts differently from their sighted peers. Tactile graphics such as raised-line drawings have been around for a long time to help students with visual impairments, but simply adding a third dimension to a graph designed for sighted students carries with it a lot of assumptions—about perspective, for example—that don’t sync with the way blind students understand the world.

Tactile maps use raised symbols, Braille and outlines of structures to allow the blind to navigate a space. This map was for young blind students to use as they learn to navigate the school grounds. Some standards were emerging at the time describing the best way to 3D print Braille and what symbols to use on maps, but for the most part we had to invent things as we went along. This did not always go well. One time we thought we would invent a symbol to show where a doorway was and succeeded in using the existing symbol for “ladies’ room.” Oops.

Creating a 3D model of a mix of physical and abstract information, such as a two-story school with room numbers and annotations (like the map we mentioned in the previous paragraph) requires a lot of tradeoffs about how much information to include. It is easy to create an unreadable thicket of Braille dots and physical model details. Any representation—even of something that isn’t particularly abstract, like a building—has to be a bit of a cartoon, emphasizing some things and ignoring others. 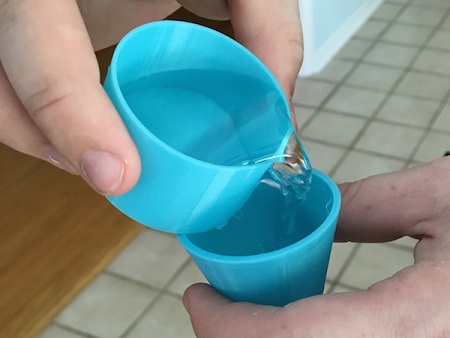 We’re not the only ones thinking about this, of course. Cheverie has collaborated with other teachers to create 3D printed maps of neighborhoods where his students live, a model of the Hubble Space Telescope, and simple math models such as rulers and protractors. He is currently teaching a blind student to use text-based design software called OpenSCAD to create designs for screws and bolts. And this isn’t the only effort of its kind. Blind undergraduate physics major Chelsea Cook’s moving 2013 TedX talk about her experiences at Virginia Tech learning physics and math from 3D printed objects makes the promise of the technology clear.

We had been able to help mentor the Pasadena students to get a few models made, but we spent the next two years exploring ways to help get 3D printable designs to all of the teachers of visually impaired students that needed them. The first step of the 3D printing process is to generate a printable computer-aided design file, called a stereolithography (STL) file. There are a lot of Web sites with free STL files available for downloading, but the odds that teachers will find exactly what they want is low and the quality of these files can be uneven. We found that teachers of visually impaired students often do not have time to learn to use computer-aided design software or to hunt through existing files. However, many have access to a 3D printer and could print designs if they had them.

One group that does have time to make 3D printable designs, though, is students learning 3D printing or 3D design. Many schools, libraries and similar groups have started makerspaces or 3D printing labs in the last year or two, and they all need things to do with their new technology. It seemed obvious to us that there was a need to connect teachers of visually impaired students with schools looking for ways to use the 3D printers they’d bought. 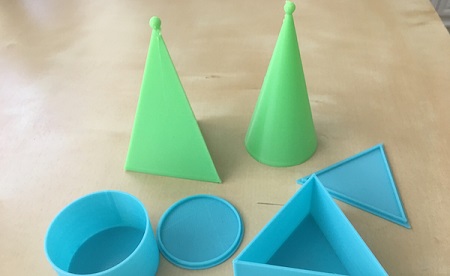 We entered the 2016 Hackaday Prize competition to create such a community on a worldwide scale. The Hackaday Prize organizers say that they encourage the use of hardware, code, scientific research, design, and electrical and mechanical abilities to make positive changes in the world. Our entry created a public Google Group where we could help teachers post requests for designs. Teachers, librarians or others who have students in search of 3D printing projects can then call dibs to create those designs. We documented tips on ways to work with a requestor to create models that would be accurate (in terms of what they were supposed to represent), easy to print reliably, and useful to the blind.

To demonstrate the process, we fulfilled one teacher’s request for designs of objects with different shapes—cones, cylinders and so on—that all had the same volume. The teachers wanted the objects to be hollow and have one open side, so the students could pour water from one to another to demonstrate that the inner volumes were the same. But they also wanted to have a way to complete the shapes, which we solved by modeling a removable lid or base for each object. We knew that people would want to print them on a variety of different 3D printers and likely using different materials, so the design needed to allow for that. Finally, the teachers asked us to blunt sharp points (like the tip of a cone) to make them comfortable for a blind person to handle. We did that by adding a little ball to the top of pointy objects like cones and pyramids. As of November 6, the open-source designs had been downloaded 729 times.

The project was chosen as a semifinalist—top honors went to a modular robot designed for search and rescue operations. But there’s a bigger picture beyond the prize. Creating a model for a blind student is just an extreme version of making models for tactile learners who generally don’t fare well with typical equations-on-the-whiteboard ways of teaching math and science. Creating a physical model requires a deep understanding well beyond what might be needed to squeak through a quiz. We hope our Google Group will catalyze a new style of collaborative learning between student and teacher.