Which Arduino Board Should I Use?

Arduino is one of the most famous development boards. You can attach sensor and actuator devices easily into the board. But which one should you be using?

Each Arduino model has unique features. To optimize Arduino board usage, you should know and understand what kind of Arduino model it is. I will introduce various Arduino models based on complexity level and usage range.

An Arduino UNO board is a development board which I recommend to anyone who wants to learn Arduino programming. There are many Arduino shields which are attached to the board. Furthermore, most tutorials and books use Arduino UNO as an experimental board. Arduino UNO has completed I/O protocols, such as digital and analog I/O, SPI, UART, and I2C/TWI, so you can utilize these I/O pins to work with sensor and actuator devices. Arduino UNO is easier to find and buy.

You can review the Arduino UNO board on this website. You can also review Arduino UNO from Arduino SRL on this site. 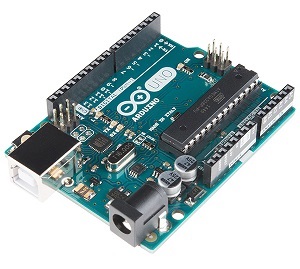 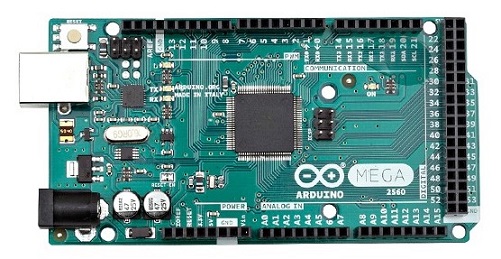 Most Arduino boards don’t have a built-in debug chip, so if you want to debug our program, you should add an additional debug tool. Fortunately, we can use the Arduino ZERO board from Arduino LLC and the Arduino M0 PRO board from Arduino SRL, which are supported for debugging without additional tools. These boards have Atmel’s Embedded Debugger (EDBG) to be used for debugging. I suggest you to use these Arduino models if you have concerns about debugging without additional tools. 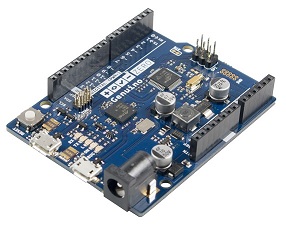 Arduino for Internet of Things 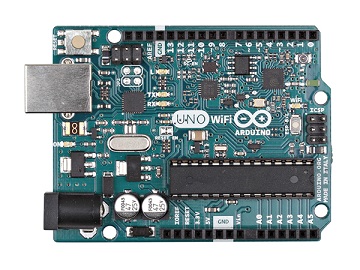 Arduino/Genuino MKR1000 is a development board with a ready-for-IoT scenario which is manufactured by Arduino LLC. The board runs with ATSAMW25 SoC, which consists of SAMD21 Cortex-M0+, WINC1500 WiFi module, and ECC508 CryptoAuthentication. It’s designed for IoT connectivity, including accessing the cloud server. Further information about Arduino/Genuino MKR1000 can be read here. This board size, which is shown in Figure 5, is small. 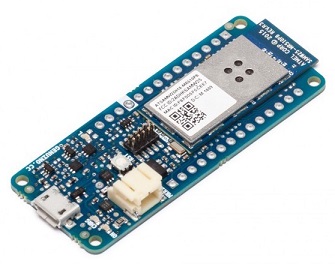 Most Arduino boards work with an RTOS environment. Arduino YUN combines MCU and WiFi MCU, which runs OpenWrt Linux (called Linino OS). This board likes a mini-computer with Linux OS. You can control Arduino MCU ATmega32u4 from Linux. We also can access Linux API from the Arduino program. The Arduino YUN board has built-in WiFi and Ethernet modules to solve your IoT cases. Figure 6 is a form of Arduino YUN. You can review and buy this board on this site. 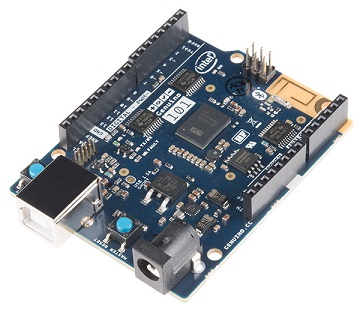 If you’re looking for an Arduino with BLE connectivity capability, you can consider using the Arduino/Genuino 101 board, which is shown in Figure 7. This board uses Intel Curie as MCU, which has a built-in BLE module. You can control this board through Bluetooth on your smartphone, such as Android and iPhone smartphones. For further information about Arduino/Genuino 101, I recommend reading this website. 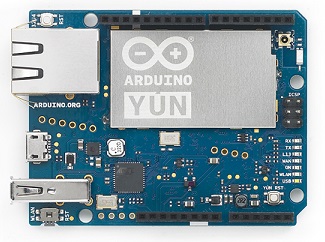 SparkFun RedBoard is a kind of Arduino-compatible board which is manufactured by SparkFun. This board has a form like the Arduino UNO board and uses ATmega328 as MCU with installed Optiboot (UNO) Bootloader. For development, we can use Arduino IDE to write a Sketch program and then flash the program to the board. If you are interested in SparkFun RedBoard, you can buy it here. You can see SparkFun RedBoard in Figure 8. 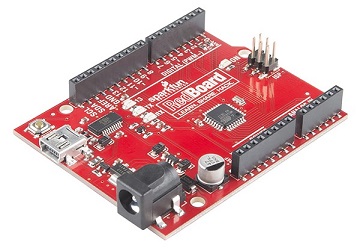 Really Bare Bones Board (RBBB) is an Arduino-compatible board which is designed by Modern Device. This board doesn’t provide a serial module so if you want to develop a Sketch program, you would need a serial tool such as FTDI cable. RBBB board is displayed in Figure 9. For further information about this board, you can review and buy it here.

Agus Kurniawan is a lecturer, IT consultant, and author. He has 15 years of experience in various software and hardware development projects, delivering materials in training and workshops, and technical writing. He has been awarded the Microsoft Most Valuable Professional (MVP) award 13 years in a row.

He is currently a researcher and involved in teaching activities related to networking and security systems at the Faculty of Computer Science, Universitas Indonesia and Samsung R&D Institute, Indonesia. He is also pursuing a PhD in Computer Science at the Freie Universität Berlin, Germany.