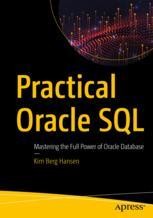 Write powerful queries using as much of the feature-rich Oracle SQL language as possible, progressing beyond the simple queries of basic SQL as standardized in SQL-92.
Both standard SQL and Oracle’s own extensions to the language have progressed far over the decades in terms of how much you can work with your data in a single, albeit sometimes complex, SQL statement. If you already know the basics of SQL, this book provides many examples of how to write even more advanced SQL to huge benefit in your applications, such as:

The process of starting from simpler statements in SQL, and gradually working those statements stepwise into more complex statements that deliver powerful results, is covered in each example. By trying out the recipes and examples for yourself, you will put together the building blocks into powerful SQL statements that will make your application run circles around your competitors.

What You Will Learn
Who This Book Is For
Oracle Database developers who already know some SQL, but rarely use features of the language beyond the SQL-92 standard. And it is for developers who would like to apply the more modern features of Oracle SQL, but don’t know where to start. The book also is for those who want to write increasingly complex queries in a stepwise and understandable manner. Experienced developers will use the book to develop more efficient queries using the advanced features of the Oracle SQL language.

​Kim Berg Hansen is a database developer from Middelfart in Denmark. As a youngster he originally wanted to work with electronics, and he tried computer programming and discovered that the programs he wrote worked well—unlike the electronics projects he soldered that often failed. This led to a VIC-20 with 5 kilobytes RAM and many hours programming in Commodore Basic.
Having discovered his talent, Kim financed computer science studies at Odense University with a summer job as sheriff of Legoredo, while learning methodology and programming in Modula-2 and C. From there he moved into consulting as a developer making customizations to ERP software. That gave him his first introduction to Oracle SQL and PL/SQL, with which he has worked extensively since the year 2000.


His professional passion is to work with data inside the database utilizing the SQL language to the fullest to achieve the best application experience for his application users. With a background fitting programs into 5 KB RAM, Kim hates to waste computing resources unnecessarily.

Kim shares his experience and knowledge by blogging at the kibeha.dk website, presenting at various Oracle User Group conferences, and being the SQL quizmaster at the Oracle Dev Gym. His motivation comes from peers who say “now I understand” after his explanations, and from end users who “can’t live without” his application coding. He is a certified Oracle OCE in SQL, and an Oracle ACE Director.

Outside the coding world, Kim is married, loves to cook, and is a card-carrying member of the Danish Beer Enthusiasts Association.