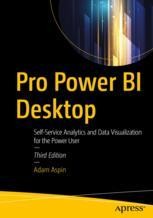 Self-Service Analytics and Data Visualization for the Power User

About this book
Deliver eye-catching and insightful business intelligence with Microsoft Power BI Desktop. This new edition has been updated to cover all the latest features of Microsoft’s continually evolving visualization product. New in this edition is help with storytelling—adapted to PCs, tablets, and smartphones—and the building of a data narrative. You will find coverage of templates and JSON style sheets, data model annotations, and the use of composite data sources. Also provided is an introduction to incorporating Python visuals and the much awaited Decomposition Tree visual.
Pro Power BI Desktop shows you how to use source data to produce stunning dashboards and compelling reports that you mold into a data narrative to seize your audience’s attention. Slice and dice the data with remarkable ease and then add metrics and KPIs to project the insights that create your competitive advantage. Convert raw data into clear, accurate, and interactive information with Microsoft’s free self-service BI tool.
This book shows you how to choose from a wide range of built-in and third-party visualization types so that your message is always enhanced. You will be able to deliver those results on PCs, tablets, and smartphones, as well as share results via the cloud. The book helps you save time by preparing the underlying data correctly without needing an IT department to prepare it for you.

What You Will Learn
Who This Book Is For
Power users who are ready to step up to the big leagues by going beyond what Microsoft Excel by itself can offer. The book also is for line-of-business managers who are starved for actionable data needed to make decisions about their business. And the book is for BI analysts looking for an easy-to-use tool to analyze data and share results with C-suite colleagues they support.

Adam Aspin is an independent business intelligence (BI) consultant based in the UK. He has worked with SQL Server for more than 25 years. During this time, he has developed several dozen reporting and analytical systems using Microsoft analytics.

A graduate of Oxford University, Adam began his career in publishing before moving into IT. Databases soon became a passion, and his experience in this arena ranges from Access to Oracle and MySQL, with occasional sorties into the world of DB2. He is, however, most at home in the Microsoft universe using SQL Server, SQL Server Analysis Services, SQL Server Reporting Services, SQL Server Integration Services, and Power BI, both on-premises and in Azure.

Business Intelligence has been Adam's principal focus for the last 25 years. He has applied his skills for a range of clients in industry sectors such as finance, utilities, telecommunications, insurance, manufacturing, and banking.

Adam is a frequent contributor to SQLServerCentral.com and Simple-Talk. He has written numerous articles for various French IT publications. A fluent French speaker, Adam has worked in France and Switzerland for many years. He speaks regularly at events such as SQLBits, SQL Saturdays, and local SQL Server user groups.