Corey Marie Green is the author of The Podcaster's A 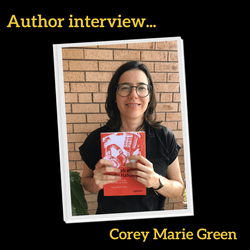 udio Handbook: A Technical Guide for Creative People. Her aim in writing the book was to bring audio engineering information to a wide audience so that readers can express themselves through the medium of podcasting. Corey talks about her motivation for writing this book, along with her process (including scheduling), her career path as an audio engineer, and her literary inspirations.

Q: How would you describe the experience of writing your book? Was it easier or harder than expected?

I really enjoyed writing the book. I often work on other people's creative projects and it was fun to spend the time working on my own. The book gave me the opportunity to try out the latest technology, and investigate multiple methods of recording so that I could bring together the easiest and most effective ways to record and edit a podcast.

Writing the book was slightly harder than predicted. As a former journalist, I had a fair idea of how much work I was signing up to. However, I had this idea that writing a book would be a lot like writing a series of articles. This was incorrect. Writing the book took longer because all of the chapters had to fit together as a coherent whole.

Another way in which writing a book was different to writing a series of articles was the extended feedback process. I have never worked in such a large group when creating a piece of journalism. Although it's my name on the cover of the book, I couldn't have created the work that I did without my team.

Altogether I would say I found the book writing process fun, but challenging.

Q: What was your schedule like when you wrote your book? Can you describe your writing process?

A book is a very large project, so I broke it down into smaller parts. The first part of my process was a brain dump. I had a lot of ideas as to what would be in the book and I wrote them all down. This took three days and by the end I had several very rough, very short chapters.

Next I created a pitch and a sample chapter, which I sent to a number of publishing companies including Apress.

After I secured a book deal with Apress I faced my first deadline: the first draft of the book. Once I knew how many chapters I would be writing, I had a look at that deadline and at what was coming up in my year. I divided the available days for writing into the number of chapters, and marked the dates when I would be finishing the first draft of every chapter.

Then I concentrated on creating one chapter at a time. I divided the chapters into sub-sections, then allocated days when I would be writing on that topic. I allocated time for research, and then time to write up my findings. More time was needed for the creation of the cartoons I included in the book, and the sourcing of images. As I was receiving feedback from multiple parties, I allocated mini-deadlines for myself to send them work and more time to incorporate their ideas.

I didn't write the chapters in order. For example, I knew that it would take some time to organize for manufacturers to send me audio gear to test, so I started a process of contacting them early. I ended up having to submit that chapter last.

After the first draft I went through the technical review and final edits, which took almost as long again. This was the time when I really needed to concentrate on the book as the sum of its parts. I went through a similar process of breaking down tasks to finish the manuscript.

With such a limited time to work on the book, I had to make sure that perfect wasn't the enemy of finished. An image that I kept in mind was that of a sculptor working in stone. A sculptor begins by making very rough cuts, then refines the basic shape of their sculpture, with the fine detail coming at the end of a long process.

Breaking the book up into its smallest parts was the only way I could possibly co-ordinate such a large project, and it enabled me to hone in on both the macro and micro detail.

Q: Are there things you would do differently in terms of planning if you were to write another book?

If I were to write another book I would allocate more time for the process of bringing the individual chapters into a coherent book. The length of that process really surprised me.

Q: Most tech authors write their books alongside work/life responsibilities—how did you find the time to complete your book?

I decided to take a pay cut to write the book. I allowed myself three days a week to work on the project, during which time I wasn't bringing in my usual money. I was fortunate to be in a position to do this.

Q: What was your main reason or inspiration for writing your book?

In my work as an audio engineer I often have clients tell me that they're "not technical," but when we sit down together and work through a new computer program or piece of audio equipment it turns out that they're quite capable. I believe that rather than people being incapable of understanding technology, they simply don't feel comfortable in that world. My aim in writing The Podcaster's Audio Handbook was to serve that audience with a resource that would make them feel welcome.

There are a number of methods I employed to make the book accessible to a non-technical audience. It's written in plain English and it embeds technical knowledge within a framework of stories from my own life. I've used audio examples so that people can hear the outcome of different technical choices. I supplied pictures and diagrams for visual learners, and I've even summarized my main points using cartoons. In this way the book caters to different types of learners, and is fun to read.

Women and queer people are underrepresented in audio engineering. As a member of both of those groups, I had an opportunity to relate to those readers. I included the work of women and queer podcasters throughout the book, and most of the cartoons depict women and/or queer people. I'm really pleased with the feedback that I've received from people saying they enjoyed the book and that it has enabled them to understand audio concepts. I have especially enjoyed hearing from people who have been inspired to make a podcast!

Q: Based on this experience, would you ever write another book?

I would consider writing a second book. In fact, I have a list of notes in my phone as to what I would include in a second edition.

Q: How did you get your started on your career path as an audio engineer?

My first exposure to audio engineering was through learning to operate the outside broadcast equipment at a radio station along with the facility where bands come in to play live. I had worked in radio for many years at that point, and I was always interested in the technical side of production. When an opportunity came to learn more I signed up immediately.

The teacher was a man named Florenz, and I still sometimes hear his voice in my head saying "it's the vibe, man." And he's quite right, one of the things I love about audio engineering is that it's so creative, and it's a process of building a strong collaboration with the talent. After I finished Florenz' course I got a qualification in audio engineering from RMIT in Melbourne, and started my own business called Transducer Audio where I work on client's podcasts.

Q: Did you have writer’s block while working on your book, and if so how did you overcome it?

I did not experience writer's block while working on my book. There was no point in the process in which I was short on ideas; I struggled more with being short on time to execute my ideas. As I had assigned a specific task to every day I never wondered what I would be doing. However, when my attention wanes I tend to stand up, do the washing up and make a cup of tea.

Q: Were you inspired by any other authors or books when writing your own?

There were a few authors who inspired this work: two card-carrying socialists, and a microbiologist. My favorite author is George Orwell. I've read a lot of his books and when I was a journalist I took inspiration from the way that he embedded himself into communities and struggles, and wrote about them from his own perspective.

In works such as Down and Out in Paris in London and Homage to Catalonia, Orwell presents himself as a British toff with strong socialist leanings who's spent time in particular communities and is reporting on his experiences. He never pretends to be the expert on other people's lives, simply an observer at a particular time and place. Technical books are generally written in the passive voice from the perspective of an expert, but I wrote The Podcaster's Audio Handbook in a similar first-person style embedding technical knowledge within my own experiences.

Another author who inspired this work was Chris Harman who wrote the 1979 leaflet How Marxism Works. This leaflet presents Marxist ideas in plain English, making them accessible to a wide audience. His work stands in contrast to the many Marxist analyses that rely on the reader having a specialist education to divine meaning. Like Chris Harman, I aimed to make my book as accessible as possible. Chris Harman hoped to empower a wide audience with knowledge of Marxism, and I hope to empower many people to express their own ideas through podcasting.

Another source of inspiration for The Podcaster's Audio Handbook is a book on microbiology called The Life That Lives On Man by Michael Andrews. This book uses wit and charm to elucidate on the subject of the flora and fauna that lives on a human body. Like Andrews, I hope to make people laugh with the stories and comics in my book. This is partly because life's too short to be having a bad time, and partly because if you're having fun you're probably going to read more of the book and retain more of the knowledge.

Technical books can be dull, they tend to rely on specialist education and they're often written in the passive voice from the perspective of an expert. I took inspiration from Orwell, Harman, and Andrews to write an audio engineering book that is friendly and accessible. It is my hope that the book inspires a large readership to put their own ideas out into the world through the medium of podcasting.

Corey Marie Green is an audio engineer from Melbourne, Australia, who specializes in podcasting and radio. She has filled many roles in her radio career, including journalist, producer, editor, and sound engineer at live events. Through her business, Transducer Audio, she provides a range of services for podcasters including editing, content development and training.