Everyone is suddenly talking about the ‘Metaverse,’ an oft-used term for the multi-user XR cloud. Since Mark Zuckerberg recently announced it as a core strategy for the future of social media, other industry players and the media have picked it up and it has become the buzzword du jour.

For techies in the XR field, the idea is obviously old news. The classic concept of a connected virtual world, including its e-commerce infrastructure, had been introduced with Neil Stephenson's “Snow Crash” in 1992 and more recently popularized in the 2018 film adaptation of Ready Player One.

For people in the industry, this is the obvious and inevitable next evolutionary step in tech. The move into multiplayer virtual reality is already happening—most obviously in gaming—but also often with projects that don’t get much publicity, but are nevertheless important XR use cases, as in engineering and architectural visualization.

But there is a snag: The Metaverse has an image problem. It is not associated with a livable, sustainable, equal, and accessible future. For that reason, a good amount of commentary is rather skeptical.

Part of the criticism can be traced back to the fact that the Metaverse was originally envisioned in a dystopian context. Remember, that in Ready Player One, the majority of XR users were living in chaotic shanty towns called “stacks,” and the slums in Snow Crash weren’t any better. Think inequality on steroids.

Add that to the fact that we live in an age where Big Tech is eating everyone for lunch. Nothing symbolizes that more than the titanic tech’s cash-hoarding FAANG space cowboys, Bezos, Musk, and Co.’s pleasure trips into orbit, while many small businesses had to close their doors during the pandemic.

The Metaverse sounds like a big tech fantasy in this context: an artificial world, where corporations set the rules and only they can monetize and determine who is allowed to play. Like now in the real world, only much more extreme. Who is going to like that?

Commentators often forget to mention that this is only one part of the story. There is more to the Metaverse than just big tech. One example is the non-profit Mozilla Foundation. Mozilla Hubs, for example, is an exceptionally well-built version of the Metaverse, based on decentralized and open standards using the 3D capabilities of WebVR. In short, the future Metaverse is not only a big tech platform war, it can also be a level playing field without gatekeepers, based on the very foundations and ideas of the free and open World Wide Web.

But the most important aspect is that the Metaverse will evolve according to the efforts of designers. I see designers as advocates of user interests in every aspect, not only in terms of usability and user retention, but also in terms of defending user interest when it comes to privacy, data usage and digital health.

The reason I wrote the book UX for XR is that we need more UX designers to come onboard the XR ship, not just to design UI interactions, but as digital product designers, shaping the way our immersive digital future is built.

The upcoming Metaverse, our XR future, is already unfolding and there is nothing stopping it. What shape it will take is yet unknown. I personally see the Metaverse like a multi-story building, at its basement is the AR cloud, a virtual infrastructure-locked physical location, allowing us to tie interactions to specific locations and remap or reskin our environment, while the upper levels are increasingly unbound from reality and its virtual spaces are only connected by blockchain data and its ecosystem. The avatar will emerge as a great opportunity to reinvent our contextual identity: stylish when gaming, smart when job-related, and, beyond that, ageless and potentially eternal past our own demise, if AI-equipped.

This new world can be the beginning of a wonderful new era of a sharing and creator economy with a level playing field for anyone. Or, if we don’t pay attention, it can become part of a grim dystopian future with gated XR platforms under big tech dominance.

It's very popular to pick on Mark Zuckerberg, but I think he’s the wrong target. He is doing a great job as an entrepreneur, trying to max out every opportunity that is thrown at him. It’s not his job to regulate himself. Instead, we should be looking at antitrust regulators. For the longest time, people have been wondering if the US Federal Trade Commission still exists. The good news is that since March 2021, when Lina Khan was appointed FTC chair, the agency is back in business, doing its job representing the people. So, if things work out, we may move past the point of hitting the wall with big tech. There is hope that things will be sorted out for a more future-proof economy and a healthier environment with better opportunities for small and medium companies, instead of big tech dominance.

I see UX designers increasingly promoting user advocacy by making sure that a product really benefits the user’s interest as opposed to just pushing tech on people. I believe, in this unique era of a dramatic paradigm shift into the Metaverse economy, UX designers are needed to be put in charge, more than ever.

The reason I wrote this book is to break down how UX designers in the web and mobile space can enter the XR field and take the reins—by giving an overview of platform technologies, techniques, and obstacles—when designing digital XR products. UX designers that have done their magic in the mobile economy are now needed in the XR economy. Helping businesses grow and making sure that the future XR world is human-centered and accessible.

At the same time, I am addressing XR developers and encouraging them to employ the UX design process for XR products, as this is still rare. UX designers can often be mediators between user interests and business goals and developers should take advantage of that. The UX design track record in the mobile economy shows, if UX wins, everyone wins.

Which in turn means: The Metaverse can be a good place, if we design it that way. 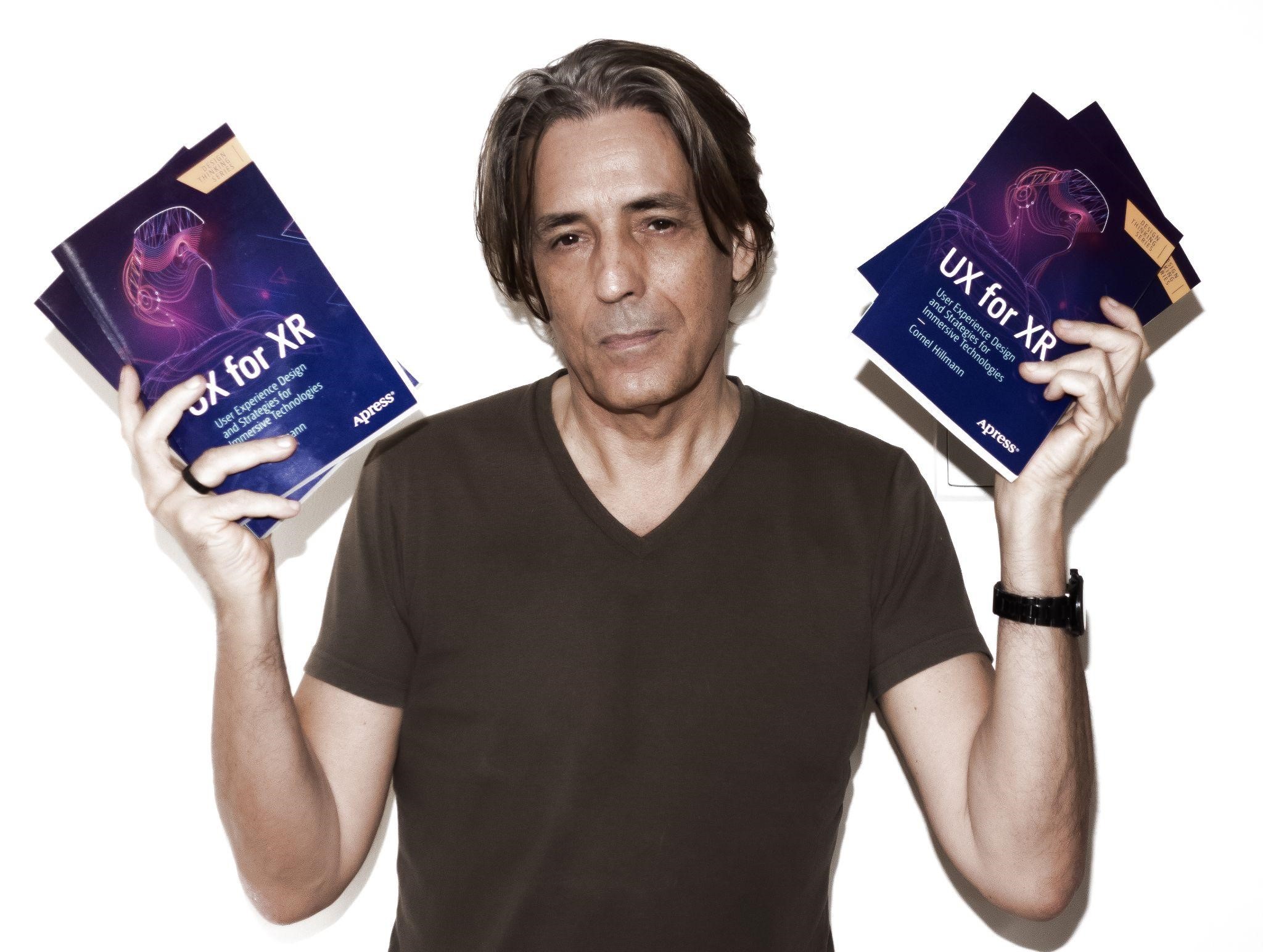 Cornel Hillmann is a media designer and CG artist with over 20 years of experience in the media and entertainment, advertising and design industry. He has worked with brands including Panasonic, Jaguar, The Future is Wild, The Singapore International Film Festival, Razor and many others. Cornel has lectured masterclasses for immersive media post-production, advanced 3D-, VR- and media design-courses at Limkokwing University and is the author of “Unreal for Mobile and Standalone VR” (Apress, 2019).

This article was contributed by Cornel Hillmann, author of UX for XR: User Experience Design and Strategies for Immersive Technologies.