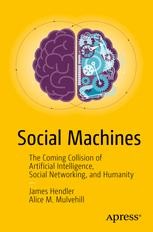 The Coming Collision of Artificial Intelligence, Social Networking, and Humanity

Will your next doctor be a human being—or a machine? Will you have a choice? If you do, what should you know before making it?This book introduces the reader to the pitfalls and promises of artificial intelligence (AI) in its modern incarnation and the growing trend of systems to "reach off the Web" into the real world. The convergence of AI, social networking, and modern computing is creating an historic inflection point in the partnership between human beings and machines with potentially profound impacts on the future not only of computing but of our world and species.AI experts and researchers James Hendler—co-originator of the Semantic Web (Web 3.0)—and Alice Mulvehill—developer of AI-based operational systems for DARPA, the Air Force, and NASA—explore the social implications of AI systems in the context of a close examination of the technologies that make them possible. The authors critically evaluate the utopian claims and dystopian counterclaims of AI prognosticators. Social Machines: The Coming Collision of Artificial Intelligence, Social Networking, and Humanity is your richly illustrated field guide to the future of your machine-mediated relationships with other human beings and with increasingly intelligent machines.
What Readers Will Learn

Who This Book Is ForGeneral readers and technically engaged developers, entrepreneurs, and technologists interested in the threats and promises of the accelerating convergence of artificial intelligence with social networks and mobile web technologies.

James Hendler is the Director of the Institute for Data Exploration and Applications and the Tetherless World Professor of Computer, Web and Cognitive Sciences at RPI. He also serves as a Director of the UK's charitable Web Science Trust. Hendler has authored over 250 technical papers in the areas of Semantic Web, artificial intelligence, agent-based computing and high performance processing. One of the originators of the Semantic Web, Hendler was the recipient of a 1995 Fulbright Foundation Fellowship, is a former member of the US Air Force Science Advisory Board, and is a Fellow of the American Association for Artificial Intelligence, the British Computer Society, the IEEE and the AAAS. He is also the former Chief Scientist of the Information Systems Office at the US Defense Advanced Research Projects Agency (DARPA) and was awarded a US Air Force Exceptional Civilian Service Medal in 2002. He is also the first computer scientist to serve on the Board of Reviewing editors for Science. In 2010, Hendler was named one of the 20 most innovative professors in America by Playboy magazine and was selected as an Internet Web Expert by the US government. In 2012, he was one of the inaugural recipients of the Strata Conference Big Data awards for his work on large-scale open government data, and he is a columnist and associate editor of the Big Data journal. In 2013, he was appointed by the governor as the Open Data Advisor to New York State and in 2014, he won a prestigious IBM faculty award for his work on cognitive computing and artificial intelligence.
Alice M. Mulvehill is a research scientist and provides consulting through her company, Memory Based Research, LLC. She was previously a lead scientist at Raytheon/BBN Technologies where she led the development of several advanced decision support systems for the Air Force and DARPA.  Prior to joining BBN she worked for the MITRE Corporation as a researcher, specializing in knowledge acquisition, knowledge representation, case-based reasoning, and planning.  While at MITRE she was part of early research teams that explored the use of Artificial Intelligence techniques for the development of planning and scheduling systems.  She was a participant in the DARPA/Rome Lab Planning Initiative and participated in the development of operationally-oriented AI-based systems for DARPA, the Air Force, and NASA.  She has authored or co-authored numerous technical papers in the areas of knowledge acquisition and representation, model development and adaptation; case-based reasoning; semantic web technology; and applications of these technologies to support logistics, planning and prediction. She is a senior member of the Association for Artificial Intelligence and a member of IEEE and ACM.  She currently provides consulting services to support the research and development of advanced information system technology and has an adjunct position at the University of Pittsburgh’s School of Nursing, where she provides guest lectures on technology. Mulvehill took her PhD in Information Science from the University of Pittsburgh.

“Social Machines, by Hendler (computer, web and cognitive sciences, Rensselaer Polytechnic Institute) and Mulvehill, a research scientist and consultant, presents a provocative, futuristic view of machine-aided interaction with humans and intelligent machines. … This is an excellent book with many new and unique insights, and it is recommended to all. Summing Up: Recommended. All readers.” (C. Tappert, Choice, Vol. 54 (9), May, 2017)