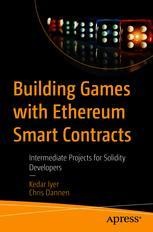 Learn how to take your existing knowledge of Ethereum and Solidity to the next level. Hone your development skills and become more familiar with the syntax of the Solidity language by working through well-tested, well-documented intermediate-level sample projects.

You will begin by covering the basics of Ethereum, Solidity, and gaming theory. From there, you will move onto sample projects that use smart contract engineering to create fun casino-style games that you can deploy and test on your friends and colleagues with real ether. All games are provably fair and auditable, so that players know the house won’t always win!

Ideal for any reader with exposure to Ethereum, the techniques this book teaches are applicable to game developers, software engineers, web developers, and cryptocurrency enthusiasts.

Entry-level programmers with some exposure to Ethereum; game developers, Blockchain and cryptocurrency enthusiasts looking to add Ethereum and Solidity development to their skill set; software engineers and Web developers

Kedar Iyer is the founder of Emergent Phenomena, a blockchain engineering and consulting company. He has four years of experience working as a software engineer and has a degree in Mechanical Engineering from UCLA. His previous ventures include LetsChai, an India-based dating site, and as part of his work for Emergent Phenomena,he developed PeerBet, a peer-to-peer sports betting platform on the Ethereum blockchain. He is the co-author of Blockchain: A Practical Guide to Developing Business, Law, and Technology Solutions (McGraw-Hill, 2017).

Chris Dannen is a founder and principal of Iterative Capital Management, and author of Introducing Ethereum and Solidity (Apress, 2017). Iterative Capital has successfully raised three (3) vehicles, Iterative Instinct Fund I, L.P., i2 Storj SPV, LP and Iterative Mining, LLC. Prior to founding Iterative, Mr. Dannen was an independent strategy consultant. He has engaged clients including Bloomberg LP and Quartz.com (Atlantic Media Group). At Bloomberg, Mr. Dannen worked with the infrastructure engineering team to collect ethnographic research from senior engineers, which could be used to improve recruiting tactics. At Quartz, he worked with the Senior Director of Branded Content in order to come up with enterprise-software focused content franchises for clients like HP and Hitachi. Before consulting independently, Mr. Dannen was a Senior Strategist at Undercurrent LLC, a 30-person management consulting company which was acquired in 2015. During his time at Undercurrent, Mr. Dannen developed long-term technology-focused business tactics for C-suite clients at American Express, General Electric, ARGO Insurance, and Pepsico. At Fast Company magazine Mr. Dannen served as senior technology editor for two years, launching a content vertical aimed at engineers, and building out a hackathon sponsored by Target. As an entrepreneur, he co-founded an iOS development shop in 2013 called Sneakers Agency in Brooklyn, NY, which continues to operate today. Mr. Dannen began his career as a technology reporter for CBS News. A self-taught programmer, Mr. Dannen holds one provisional patent on a computing hardware device for video distribution. As a student athlete on the Men’s Crew, he graduated from the University of Virginia in three years with a degree in English Literature. He holds a certification in editorial publishing from Columbia University’s School of Journalism.