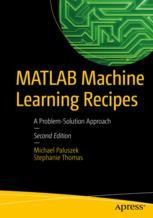 Harness the power of MATLAB to resolve a wide range of machine learning challenges. This book provides a series of examples of technologies critical to machine learning. Each example solves a real-world problem. All code in MATLAB Machine Learning Recipes:  A Problem-Solution Approach is executable. The toolbox that the code uses provides a complete set of functions needed to implement all aspects of machine learning. Authors Michael Paluszek and Stephanie Thomas show how all of these technologies allow the reader to build sophisticated applications to solve problems with pattern recognition, autonomous driving, expert systems, and much more.
What you'll learn:

Who is this book for: The primary audiences are engineers, data scientists and students wanting a comprehensive and code cookbook rich in examples on machine learning using MATLAB.

Michael Paluszek is the co-author of MATLAB Recipes published by Apress. He is President of Princeton Satellite Systems, Inc. (PSS) in Plainsboro, New Jersey. Mr. Paluszek founded PSS in 1992 to provide aerospace consulting services. He used MATLAB to develop the control system and simulation for the Indostar-1 geosynschronous communications satellite, resulting in the launch of PSS' first commercial MATLAB toolbox, the Spacecraft Control Toolbox, in 1995. Since then he has developed toolboxes and software packages for aircraft, submarines, robotics, and fusion propulsion, resulting in PSS' current extensive product line. He is currently leading an Army research contract for precision attitude control of small satellites and working with the Princeton Plasma Physics Laboratory on a compact nuclear fusion reactor for energy generation and propulsion. Prior to founding PSS, Mr. Paluszek was an engineer at GE Astro Space in East Windsor, NJ. At GE he designed the Global Geospace Science Polar despun platform control system and led the design of the GPS IIR attitude control system, the Inmarsat-3 attitude control systems and the Mars Observer delta-V control system, leveraging MATLAB for control design. Mr. Paluszek also worked on the attitude determination system for the DMSP meteorological satellites. Mr. Paluszek flew communication satellites on over twelve satellite launches, including the GSTAR III recovery, the first transfer of a satellite to an operational orbit using electric thrusters. At Draper Laboratory Mr. Paluszek worked on the Space Shuttle, Space Station and submarine navigation. His Space Station work included designing of Control Moment Gyro based control systems for attitude control. Mr. Paluszek received his bachelors in Electrical Engineering, and master's and engineer’s degrees in Aeronautics and Astronautics from the Massachusetts Institute of Technology. He is author of numerous papers and has over a dozen U.S. Patents.
Stephanie Thomas is the co-author of MATLAB Recipes, published by Apress. She received her bachelor's and master's degrees in Aeronautics and Astronautics from the Massachusetts Institute of Technology in 1999 and 2001. Ms. Thomas was introduced to PSS' Spacecraft Control Toolbox for MATLAB during a summer internship in 1996 and has been using MATLAB for aerospace analysis ever since. She built a simulation of a lunar transfer vehicle in C++, LunarPilot, during the same internship. In her nearly 20 years of MATLAB experience, she has developed many software tools including the Solar Sail Module for the Spacecraft Control Toolbox; a proximity satellite operations toolbox for the Air Force; collision monitoring Simulink blocks for the Prisma satellite mission; and launch vehicle analysis tools in MATLAB and Java, to name a few. She has developed novel methods for space situation assessment such as a numeric approach to assessing the general rendezvous problem between any two satellites implemented in both MATLAB and C++. Ms. Thomas has contributed to PSS' Attitude and Orbit Control textbook, featuring examples using the Spacecraft Control Toolbox, and written many software User's Guides. She has conducted SCT training for engineers from diverse locales such as Australia, Canada, Brazil, and Thailand and has performed MATLAB consulting for NASA, the Air Force, and the European Space Agency.