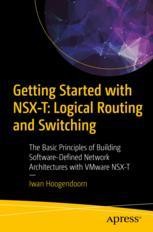 Getting Started with NSX-T: Logical Routing and Switching

This primer on NSX-T helps you understand the capabilities and features of NSX-T, how to configure and manage NSX-T, and integrate NSX-T with other software. The book is the first in a series that will teach you the basics of NSX-T, which is an update of VMware's original software-defined networking (SDN) architecture aimed at making networks agile and flexible.

You will become familiar with VMware's software-defined data center (SDDC) ecosystem and how NSX-T fits in. You will understand NSX-T components such as NSX-T Manager, NSX-T Edge Transport Nodes, and NSX-T Host Transport Nodes. And you will learn how to install and configure network services such as East/West and North/South routing capabilities, layer two switching, VRF, EVPN, multicast, and layer two bridging.

The book provides best practices on how to configure routing and switching features, and teaches you how to get the required visibility of not only your NSX-T platform but also your NSX-T-enabled network infrastructure.

The book explains security, advanced network features, and multi-site capabilities and demonstrates how network and security services can be offered across multiple on-premise locations with a single pane of glass for networking and security policy management. The interface with public cloud services is discussed and the book explains NSX-T operation in an on-premise private cloud and positioning and integrating NSX-T on a public cloud (off premises).

Iwan Hoogendoorn started his IT career in 1999 as a help desk agent. He began learning Microsoft products and obtained MCP, MCSA, MCDBA, and MCSE certifications.

While working as a Microsoft Systems Engineer, he developed additional skills and knowledge in computer networking with Cisco products. He dreamed of working for Cisco but first needed to finish his bachelor's degree in ICT, which he completed in 2009.

In 2010, Iwan began working for his dream company, Cisco. After finishing his master's degree in computer science at the University of Amsterdam and becoming a CCIE (#13084) in six different technology areas, he wanted to learn something new and network virtualization was the next logical step.

Iwan decided to learn VMware NSX and got the opportunity to work for VMware in 2016 as a Senior NSX PSO Consultant. In his time at VMware, he gained more knowledge on private and public clouds and the related products that VMware developed to build the Software-Defined Data Center (SDDC).

After working for four years as a Senior NSX PSO Consultant (primarily with VMware NSX-v and NSX-T), Iwan was promoted to Staff SDDC Consultant focusing on the full SDDC stack, including Hyperscaler offerings on public clouds such as AWS (VMC on AWS), Microsoft (Azure VMware Solution), and Google (Google Cloud VMware Engine).

Iwan is certified on multiple VMware products, including NSX, and is actively working with VMware certification to develop network-related exams for VMware. He is also AWS and TOGAF certified.