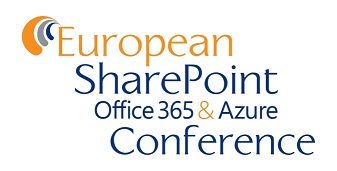 Day zero began with eight intriguing pre-conference tutorials; including two from notable SharePoint Apress authors Vlad Catrinescu and Sahil Malik. Proud to be hosting the event in Dublin, ESPC2017 kicked off with an Irish dance troupe on stage to get the energy high. General sessions began Tuesday, with an opening keynote from Microsoft Corporate Vice President, and the “father” of SharePoint, Jeff Teper.  Jeff revisited the many SharePoint and Office announcements made at Microsoft Ignite in fall of this year and he continues to drive home his key message that “SharePoint is not just a product, it’s a community.” This ties in nicely with Satya Nadella’s emphasis that people, not technology, do great things. Jeff also recapped the six pillars of SharePoint with a host of demos from big names from the mothership and SharePoint community, including Stephen Rose, Dan Holme, Naomi Moneypenny, and Benjamin Niaulin. Jeff made it clear to the predominantly European audience that Microsoft had made good on its promise to them at ESPC Stockholm to make “big things” happen in SharePoint.

While trade events are always a platform for Microsoft to rollout and market new features to a dedicated SharePoint community, and no question there are many interesting things coming down the pike, it will likely take SharePoint users (especially those who have had “admin” in their title) some time to get comfortable with all the changes and features. As one attendee put it, “In the early days of SharePoint, updates didn’t happen often enough, now in the cloud they happen too quickly. I can’t stay on top of them.” While hybrid scenarios seem to be the most common for companies, for on premise users, there will be new releases in 2019 of Exchange Server, SharePoint Server, Skype for Business, and Office. These products will be “lighter” versions than what will be available online. There is no question that SharePoint and its dedicated community is thriving and excited about all the new possibilities!

Apress is pleased to be a media sponsor of this year’s European Sharepoint, Office 365, and Azure Conference and will continue to share great content, in the form of chapter excerpts and open books, from its lineup of SharePoint, Azure, and Office 365 publications. Any prospective authors with an idea or experts who are interested in tech reviewing manuscripts should feel free to reach out to Joan Murray <joan.murray@apress.com>, a Senior Editor on the Apress Microsoft editorial team.