Artificial intelligence and machine learning have become essential functions of nearly every sector of the tech industry. While this advanced technology gives companies the ability to grow leaps and bounds ahead of where they were able to previously, it also presents some significant concerns that new Apress release Understand, Manage, and Prevent Algorithmic Bias addresses with expertise and ease.

Tobias Baer, PhD, and former Master Expert and Partner at McKinsey & Co., has written a timely book that business executives, data scientists, students, developers, politicians, journalists, and many more will gain extremely high value from in seeking knowledge about algorithmic bias. We often think of machines and systems as objective operators, but they are, after all, created by humans. This imbues every single one of these systems with the implicit bias of its creator and of the data it is trained with. Baer expertly addresses some of the 100+ varieties of natural bias such as confirmation bias, stability bias, pattern-recognition bias, and many others.

Understand, Manage, and Prevent Algorithmic Bias has arrived at the ideal time, as we as a technologically advanced society are now coming to terms with the inherent ethical flaws in said technology. You will come away from this book with managerial and statistical techniques to develop unbiased algorithms, the ability to detect bias more quickly, and knowledge to create unbiased data. In order to make your data organization the best that it can be, you first need to “understand, manage, and prevent” algorithmic bias. 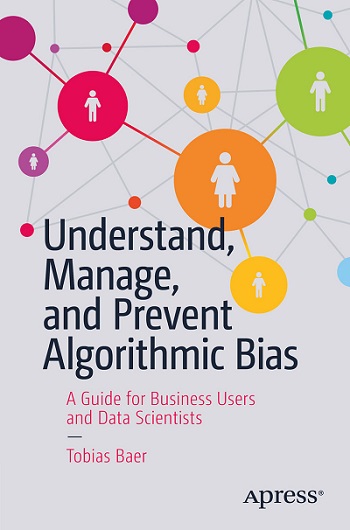