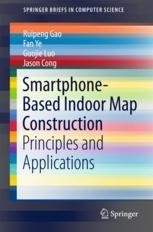 This book focuses on ubiquitous indoor localization services, specifically addressing the issue of floor plans. It combines computer vision algorithms and mobile techniques to reconstruct complete and accurate floor plans to provide better location-based services for both humans and vehicles via commodity smartphones in indoor environments (e.g., a multi-layer shopping mall with underground parking structures). After a comprehensive review of scene reconstruction methods, it offers accurate geometric information for each landmark from images and acoustics, and derives the spatial relationships of the landmarks and rough sketches of accessible areas with inertial and WiFi data to reduce computing overheads. It then presents the authors’ recent findings in detail, including the optimization and probabilistic formulations for more solid foundations and better robustness to combat errors, several new approaches to promote the current sporadic availability of indoor location-based services, and a holistic solution for floor plan reconstruction, indoor localization, tracking, and navigation. The novel approaches presented are designed for different types of indoor environments (e.g., shopping malls, office buildings and labs) and different users. A valuable resource for researchers and those in start-ups working in the field, it also provides supplementary material for students with mobile computing and networking backgrounds.

Dr. Ruipeng Gao is currently a lecturer in the School of Software Engineering, Beijing Jiaotong University, China. He received his Ph.D degree in computer science from Perking University in 2016. His advisor is Prof. Jason Cong. Dr. Gao’s research interests include mobile computing and sensor networks. He has published over 16 research papers on indoor localization area, including ACM MobiCom, ACM MobiSys, ACM SenSys, IEEE INFOCOM, IEEE ICC, IEEE GlobeCom, and IEEE Transactions on Mobile Computing. A portion of this monograph is from his Ph.D thesis, which has won the 2016 Outstanding PhD Dissertation Award from both Perking University and the National Innovation Center for Energy-efficient Synergy Computing in China.

Dr. Fan Ye is currently an assistant professor in the ECE Department, Stony Brook University. He received the BE and MS degrees from Tsinghua University, and the PhD degree from the Computer Science Department, UCLA. He has published more than 60 peer reviewed papers that have received more than 7,000 citations according to Google Scholar. He has 21 granted/pending US and international patents/applications. His research interests include mobile sensing platforms, systems and applications, Internet-of-Things, indoor location sensing, wireless, and sensor networks.

Dr. Guojie Luo is currently an associate professor in the School of EECS, Peking University, China.  He received the BS degree in computer science from Peking University in 2005, and the MS and PhD degrees in computer science from UCLA, in 2008 and 2011, respectively. He received the 2013 ACM SIGDA Outstanding PhD Dissertation Award in Electronic Design Automation and the 10-year Retrospective Most Influential Paper Award at ASPDAC 2017. He is currently an assistant professor in the School of EECS, Peking University. His research interests include FPGA design automation, FPGA acceleration for imaging and sensing, and design technologies for 3D ICs.

Prof. Jason Cong is a Distinguished Chancellor’s Professor at the Computer Science Department, also with joint appointment from the Electrical Engineering Department, of University of California, Los Angeles, the director of Center for Domain-Specific Computing (CDSC),  the director of VLSI Architecture, Synthesis, and Technology  (VAST) Laboratory, and  a distinguished visiting professor at Peking University.  He served as the chair the UCLA Computer Science Department from 2005 to 2008.  Dr. Cong’s research interests include synthesis of VLSI circuits and systems, programmable systems, novel computer architectures, nano-systems, and highly scalable algorithms.  He has over 400 publications in these areas, including 10 best paper awards, three 10-Year Most Influential Paper Awards, and one inducted to the FPGA and Reconfigurable Computing Hall of Fame.  He was elected to an IEEE Fellow in 2000 and ACM Fellow in 2008, and the National Academy of Engineering in 2017.