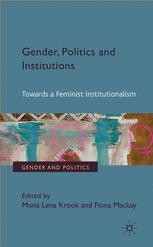 Towards a Feminist Institutionalism

'This superb book is one of those rare collections that moves a field forward. Scholars of institutionalism, for all their vital contributions to the social sciences, have given short shrift to inequality. Feminist social scientists have made inequality their core concern ... Krook and Mackay ... open up a pathbreaking terrain for the study of feminist institutionalism.'

'A really innovative and important collection which shows, both theoretically and in rich empirical detail, the considerable challenge that feminism poses to contemporary institutionalism.'

'Based on original research, the book shows how institutionalism can benefit from a gendered analysis of power, agency and change. A fascinating and productive synthesis that will be of value to students, scholars and policymakers alike.'

From the Foreword by Joni Lovenduski, Anniversary Professor of Politics, Birkbeck College, University of London, UK

'This book demonstrates how very much feminist and gender studies have to contribute to the 'neo-institutionalist' turn in political science. It offers major insights into the 'gendering' of institutions, with essays by top scholars on a wide range of issues, from government structures to electoral politics, family organization to welfare provision. Most importantly, it makes it clear that gender matters in a multitude of ways, and that one cannot fully understand institutional continuity or change without coming to grips with 'feminist institutionalism'.'

'This collection of essays travels across the world, carefully mixing theory and analysis from gender and institutional studies, with very promising results. The authors manage to maintain an engaging and clear dialogue, and offer a compelling insight into future research possibilities.'

'Do we need another institutionalism? The answer is absolutely. We need institutionalism to evolve in order to situate formal and informal institutions within a context of wider social divisions including gender. This ground-breaking book, edited by Mona Lena Krook and Fiona Mackay, does precisely this. Feminist institutionalism has arrived!'