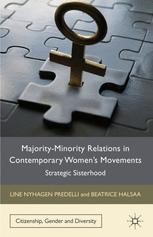 This book examines contemporary relations between ethnic majority and ethnic minority women's movements in Norway, Spain and the United Kingdom, and women's movements' participation in and influence on public policy that focuses on violence against women.

LINE NYHAGEN PREDELLI Senior Lecturer in Sociology at Loughborough University, UK. A sociologist and a political scientist, she was one of the leading researchers within the EU funded FEMCIT project (2007-2011).

BEATRICE HALSAA Professor at the Centre for Gender Research at the University of Oslo, Norway. She was scientific Director of the EU funded FEMCIT project (2007-2011).

"I find that the book has made an important contribution to feminist theory and research by filling a gap in current research about interactions between majority and minority women's movements." - Kjønnsforskning

"This is a theoretically rich empirical study, with critical discussions of multiculturalism,intersecting inequalities and citizenship as ongoing practices producing patterns of privilege and disadvantage." - Gender, Place & Culture

"Sets out a comprehensive and effective framework for exploring these relations further by combining rich and original empirical material with in-depth (national) contextualizations within a relevant and timely look at majority/minority civil society relations as they play out in multicultural society." - Nordic Journal of Feminist and Gender Research

'Ambitious, thought provoking, and significant both theoretically and empirically [the book] presents important research and analyses that enrich our understanding of the challenges and successes faced by women internationally and in the nation-state.'- Joyce Gelb, Journal of Women, Politics and Policy, 36.1

"In this double comparison, they have captured the variable and shifting temporalities; the multiplicities of form and claim; the tensions, conflicts, negotiations and alliances; and the differentiated impacts on policy and advancement of citizenship enactment associated with women's movements... There should be no doubt at all about the labour involved in carrying out this double-comparison: intellectual, practical, emotional labour that needs to be recognized and applauded." - Gail Lewis, European Journal of Women's Studies, 20.1

"This ambitious and rich volume offers much to the sociology of social movements, to scholarship bridging migration and gender studies, and to comparative equality policy studies. [...] Given the topical question of violence, this book can be used not only for those studying social movements, race and gender policy, but also for specialists on violence against women." - Alison Woodward, The Sociological Review, 63

"[...] this book sparks an important new debate around what I suggest could be termed a new branch of third-wave feminism, or rather a tributary of it that then flows back into the mainstream to give it added impulse. But most usefully, for those engaged in this highly complex research world, Nyhagen and Halsaa masterfully guide us through and reformulate a key range of concepts, terminologies and empirical discoveries that act as critical briefings for the researcher as well as showing us the richness of minority women's activism. In this sense, the book is a gift." - Monica Threlfall, International Journal of Iberian Studies, 28.2/3