Genders and Sexualities in the Social Sciences
Free Preview 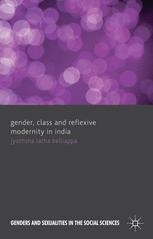 Using in-depth interviews, this book explores women employed in the Indian IT industry and highlights the gender specific and culturally specific consequences of reflexive modernity in neo-liberal India.

"This volume is a welcome addition to the flourishing feminist literature by non-Western scholars that has, for decades, focused on the specificities of experiences of women living in different societies and celebrating the different strategies adopted by them. The process of adapting, adopting and changing concepts of modernity in the case of women in the IT industry has been meticulously analysed and contextualised by Belliappa providing a striking and valuable dimension to the growing body of work." - Professor the Baroness Haleh Afshar, OBE, University of York, UK

"In this book Jyothsna Belliappa provides a finely nuanced and reflective study of the middle class Indian woman. Her emphasis on the influence of the family on the lives of women through her rich and textured analysis, brings home to us the idea that modernity in India is not an individual project, and is constituted in social and cultural contexts. This book offers a unique critique of 'reflexive modernity' from the vantage point of being Indian, middle class and woman in Bangalore, the epitome of a changing, modern India." - Meenakshi Thapan, Professor of Sociology, Delhi School of Economics, India

"Bangalore based academic Jyothsna Belliappa in her powerful new book Gender, Class and Reflexive Modernity provides a nuanced discussion of the effects of de-regulation through her analysis of women's employment in Bangalore's Information Technology (IT) industry. In doing so her analysis underscores the importance of institutions (understood as rules) in shaping outcomes at the level of family, community and political life in emerging economies." - Mathew Kurian, UNU-Flores, Germany

"This book is an admirable effort to deconstruct western sociological theories as being of universal applicability." - Maithreyi Krishnaraj, SNDT Women's University, India

"This well-written and engaging book makes a strong contribution to the 'decolonisation' of social theory in Belliappa's call for specificity, its description of the lived experiences of women in historical and cultural context, and its focus on their practices of negotiation and capacities to make sense of processes of cultural change." - Melissa Butcher, Sociology, 49(2)