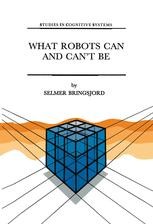 What Robots Can and Can’t Be

ments be thrown to the wind - in light of the fact that careful, precise, step-by-step deductive arguments will be presented below for each and every proposition that might be cavalierly regarded prima facie implausible. Key Theses So, to put it colloquially, I think we're headed toward real­ izing Blade Runner, a classic sci fi movie in which only an elaborate pupil-scanner (which detects the usual physiolog­ ical correlate to an emotional response to provocative ques­ tions) enables one to distinguish androids from humans. And Blade Runner turned real, it seems to me, will be the Age of The Philosopher. Qualia Scanner Pupils undilated! Why? Well, to start, this will be an era within which the so-called "problem of other minds" will be especially pointed, because the sort of question frequently posed by in­ structors in introductory philosophy courses, namely How do you know, really know, that the person next to you isn't just a robot, that underneath her "skull" hums a complicated silicon device instead of a flesh-and-blood human brain? WHAT ROBOTS CANANDCAN'TBE 4 will be a deadly serious one.