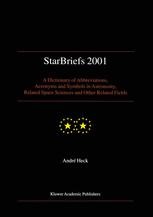 A Dictionary of Abbreviations, Acronyms and Symbols in Astronomy, Related Space Sciences and Other Related Fields

This compilation probably looks like one of the craziest things a human being could spend his or her time on. Yet nobody would wonder at someone taking a short walk every day - after twenty five years that person would have covered a surprisingly long distance. This is exactly the story behind this list, which appeared first as a few pages within the directory StarGuides (or whatever name it had at that time) and as a distinct sister publication since 1990. The idea behind this dictionary is to offer astronomers and related space scientists practical assistance in decoding the numerous abbreviations, acronyms, contractions and symbols which they might encounter in all aspects of the vast range of their professional activities, including traveling. Perhaps it is a bit paradoxical, but if scientists quickly grasp the meaning of an acronym solely in their own specific discipline, they will probably encounter more difficulties when dealing with adjacent fields. It is for this purpose that this dictionary might be most often used. Scientists might also refer to this compilation in order to avoid identifying a project by an acronym which already has too many meanings or confused definitions.