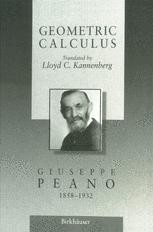 According to the Ausdehnungslehre of H. Grassmann

Calcolo Geometrico, G. Peano's first publication in mathematical logic, is a model of expository writing, with a significant impact on 20th century mathematics. Kannenberg's lucid and crisp translation, Geometric Calculus, will appeal to historians of mathematics, researchers, graduate students, and general readers interested in the foundations of mathematics and the development of a formal logical language.

In Chapter IX, with the innocent-sounding title "Transformations of a linear system," one finds the crown jewel of the book: Peano's axiom system for a vector space, the first-ever presentation of a set of such axioms. The very wording of the axioms (which Peano calls "definitions") has a remarkably modern ring, almost like a modern introduction to linear algebra. Peano also presents the basic calculus of set operation, introducing the notation for 'intersection,' 'union,' and 'element of,' many years before it was accepted.

Despite its uniqueness, Calcolo Geometrico has been strangely neglected by historians of mathematics, and even by scholars of Peano. The book has never been reprinted in its entirety, and only two chapters have ever been translated into English. In part, this neglect has been due to Peano's organization of the work. That is, the section on mathematical logic bears almost no relation to the rest of the book, and the material there was superseded only a year after its publication by Peano's second book. Since all but this first section was generally thought to be expository rather than original work, it was regarded lightly, if noticed at all, and ultimately all but forgotten. Only in very recent years have the book's unique merits begun to be recognized.

Among these merits are Peano’s presentation of the essential features of Grassmann’s notoriously obscure Ausdehnungslehre, a clarification and improvement upon Grassmann’s theory of extensive magnitudes, and a dissemination of other hard-to-understand material.

Readers of this valuable translation will gain insight into the work of a distinguished mathematician and founder of mathematical logic.

"Giuseppe Peano (1858-1932) who distinguished himself in several branches of mathematics, was among the earliest ones to duly appreciate Grassmann's algebraic ideas."