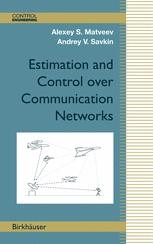 Estimation and Control over Communication Networks

Although there is an emerging literature on this topic, this is the first book that attempts to present a systematic theory of estimation and control over communication networks. Using several selected problems of estimation and control over communication networks, the authors present and prove a number of results concerning optimality, stability, and robustness having practical significance for networked control system design. In particular, various problems of Kalman filtering, stabilization, and optimal control over communication channels are considered and solved. The results establish fundamental links among mathematical control theory, Shannon information theory, and entropy theory of dynamical systems.

Key features and topics of the work:

* Covers estimation and stabilization of both linear and nonlinear systems

This essentially self-contained monograph offers accessible mathematical models and results for advanced postgraduate students, researchers, and practitioners working in the areas of control engineering, communications, information theory, signal processing, and applied mathematics who have an interest in the emerging field of networked control systems.

"The first book that attempts to presents a systematic theory of estimation and control over communication networks. … The book is an excellent up-to-date resource of working knowledge with long-term evidence in the field. The text can serve also as a useful reference book about this challenging research topic. The monograph is intended for researchers, practitioners, postgraduate students, and all professionals … interested in the emerging subject of networked control systems." (Lubomír Bakule, Zentralblatt MATH, Vol. 1165, 2009)

“This book is a research monograph that is concerned with problems of control and state estimation over communication networks. The book begins with an introduction that outlines the main problems that will be addressed in the book. … Overall, the book presents a range of new results in the area of control and state estimation via communication networks.”­­­ (Ian Petersen, Mathematical Reviews, Issue 2010 g)