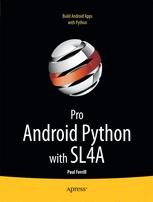 Pro Android Python with SL4A is for programmers and hobbyists who want to write apps for Android devices without having to learn Java first. Paul Ferrill leads you from installing the Scripting Layer for Android (SL4A) to writing small scripts, to more complicated and interesting projects, and finally to uploading and packaging your programs to an Android device.

Android runs scripts in many scripting languages, but Python, Lua, and Beanshell are particularly popular. Most programmers know more than one programming language, so that they have the best tool for whatever task they want to accomplish. Pro Android Python with SL4A explores the world of Android scripting by introducing you to the most important open-source programming languages that are available on Android-based hardware.

Pro Android Python with SL4A starts by exploring the Android software development kit and then shows you how to set up an Eclipse-based Android development environment. You then approach the world of Android programming by using Beanshell, which runs on the Dalvik, and learning how to write small programs to administer an Android device.

Next, discover how Lua, a lightweight language perfectly suited for scripting on smaller devices, can work with Android. Lua can be used for small but important tasks, like SMS encryption and synchronizing photos with flickr.

Last, but certainly not least, you will discover the world of Python scripting for SL4A, and the power contained within the full range of Python modules that can combine with the Android SDK. You'll learn to write small location-aware apps to get you started, but by the end of this book, you'll find yourself writing fully GUI-fied applications running on the Android desktop!

Pro Android Python with SL4A is rounded out with a chapter on distributing and packaging scripts, a skill that you'll find very useful as you reach out to a wider audience with your programs.

Paul Ferrill has been writing in the computer trade press for more than 20 years. He got his start writing networking reviews for PC Magazine on products like LANtastic and early versions of Novell Netware. Paul holds both bachelor's and master's degrees in electrical engineering, and has written software for more computer platforms and architectures than he can remember.