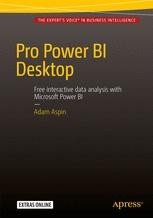 This book shows how to deliver eye-catching Business Intelligence with Microsoft Power BI Desktop. You can now take data from virtually any source and use it to produce stunning dashboards and compelling reports that will seize your audience’s attention. Slice and dice the data with remarkable ease then add metrics and KPIs to project the insights that create your competitive advantage. Make raw data into clear, accurate, and interactive information with Microsoft’s free self-service business intelligence tool.

Pro Power BI Desktop will help you to push your BI delivery to the next level. You’ll learn to create great-looking visualizations and let your audience have fun by interacting with the elegant and visually arresting output that you can now deliver. You can choose from a wide range of built-in and third-party visualization types so that your message is always enhanced. You’ll be able to deliver those results on the PC, on tablets, on smartphones, as well as share results via the cloud. Finally, this book helps you save time by preparing the underlying data correctly without needing an IT department to prepare it for you. Power BI Desktop will let your analyses speak for themselves.

What You Will LearnAudiencePro Power BI Desktop is written for any user who is comfortable in Microsoft Office. Everyone from CEOs and Business Intelligence developers through to power users and IT managers can use this book to outshine the competition by producing 21st Century business intelligence visualizations and reporting on a variety of devices from a variety of data sources. All of this is possible through leveraging your existing skill set with the same, common Microsoft tools you already use in your daily work.

Adam Aspin is an independent business intelligence consultant based in the United Kingdom. He has worked with SQL Server for seventeen years. During this time, he has developed several dozen reporting and analytical systems based on the Microsoft BI product suite.

A graduate of Oxford University, Adam began his career in publishing before moving into IT. Databases soon became a passion, and his experience in this arena ranges from dBase to Oracle to Microsoft Access to MySQL, with occasional sorties into the world of DB2. He is, however, most at home in the Microsoft universe using SQL Server Analysis Services, SQL Server Reporting Services, and SQL Server Integration Services.

Business Intelligence has been Adam's principal focus for the last ten years. He has applied his skills for a range of clients, including J.P. Morgan, The Organisation for Economic Co-operation and Development (OECD), Tesco, Centrica, Harrods, Vodafone, Crédit Agricole, Cartier, Alfred Dunhill, The RAC, Willis Insurance, Signet, and EMC Conchango.