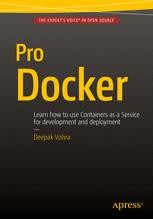 In this fast-paced book on the Docker open standards platform for developing, packaging and running portable distributed applications, Deepak Vorhadiscusses how  to build, ship and run applications on any platform such as a PC, the cloud, data center or a virtual machine. He describes how to install and create Docker images. and the advantages of Docker containers.The remainder of the book is devoted  to discussing using Docker with important software solutions. He begins  by discussing using Docker with a traditional RDBMS using Oracle and MySQL.  Next he moves on to NoSQL with chapter on MongoDB Cassandra, and Couchbase.   Then he addresses the use of Docker in the Hadoop ecosystem with complete chapters on utilizing not only Hadoop, but Hive, HBase, Sqoop, Kafka, Solr and Spark.

Who This Book Is ForApache Hadoop Developers. Database developers. NoSQL Developers.
Show all
About the authors

Deepak Vohra is a consultant and a principal member of the NuBean-dot-com software company. Deepak is a Sun-certified Java programmer and Web component developer.He has worked in the fields of XML, Java programming, and Java EE for over five years. Deepak is the coauthor of Pro XML Development with Java Technology (Apress, 2006). Deepak is also the author of the JDBC 4.0 and Oracle JDeveloper for J2EE Development, Processing XML Documents with Oracle JDeveloper 11g, EJB 3.0 Database Persistence with Oracle Fusion Middleware 11g, and Java EE Development in Eclipse IDE (Packthing). He also served as the technical reviewer on WebLogic: The Definitive Guide (O’Reilly Media, 2004) and Ruby Programming for the Absolute Beginner (Cengage Learning PTR, 2007).