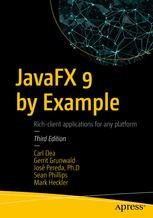 Create media-rich client applications using JavaFX 9 and the Java 9 platform. Learn to create GUI-based applications for mobile devices, desktop PCs, and even the web. Incorporate media such as audio and video into your applications. Interface with hardware devices such as Arduino and Leap Motion. Respond to gesture control through devices such as the Leap Motion Controller. Take advantage of the new HTTP2 API to make RESTful web requests and WebSockets calls.

New to this edition are examples of creating stylized text and loading custom fonts, guidance for working with Scene Builder to create visual layouts, and new content on developing iOS and Android applications using Gluon mobile. The book also covers advanced topics such as custom controls, JavaFX 3D, gesture devices, printing, and animation. Best of all, the book is full of working code that you can adapt and extend to all your future projects.

Is your goal to develop visually exciting applications in the Java language? Then this is the book you want at your side. JavaFX 9 by Example is chock-full of engaging, fun-to-work examples that bring you up to speed on the major facets of JavaFX 9. You'll learn to create applications that look good, are fun to use, and that take advantage of the medium to present data of all types in ways that engage the user and lead to increased productivity. The book:

Who This Book Is For
Java developers developing visual and media-rich applications to run on PCs, phones, tablets, Arduino controllers, and more. This includes developers tasked with creating visualizations of data from statistical analysis and from sensor networks. Any developer wanting to develop a polished user-interface in Java will find much to like in this book.

Carl P. Dea is a principal software engineer. He has been developing software for over 20 years, for many clients from Fortune 500 companies to nonprofit organizations. He has written software ranging from mission-critical applications to ecommerce-based Web applications. His passion for software development started when his middle school science teacher showed him a TRS-80 computer. Carl has been using Java since the very beginning, and he has been a huge JavaFX enthusiast since the early days when it was its own language called JavaFX script. His current software development interests are UI/UX, game programming, data visualizations, embedded systems, smartphones, AI, and robotics. When Carl is not working, he and his wife enjoy canoeing and day trips to the beach. Carl and his wife are proud parents of their younger daughter who attends Salisbury University. Carl and his wife are also proud of their older daughter, who is a high school teacher in Anne Arundel county Maryland. Carl lives in Pasadena, Maryland, USA.
Gerrit Grunwald is a software engineer with more than 10 years of experience in software development. He has been involved in development of Java desktop applications and controls. His current interests include JavaFX, HTML5, and Swing, especially development of custom controls in these technologies. Gerrit is also interested in Java-driven embedded technologies like JavaSE Embedded on Raspberry Pi, i.MX6, BeagleBone Black, CubieBoard2, and similar devices. He is a true believer in open source software and has participated in popular projects like JFXtras.org as well as his own projects (Enzo, SteelSeries Swing, SteelSeries Canvas). Gerrit is an active member of the Java community, where he founded and leads the Java User Group Münster (Germany), co-leads the JavaFX and IoT community at Oracle, and is a JavaOne RockStar and Java Champion. He is a speaker at conferences and user groups internationally.José Pereda, PhD in Structural Engineering, works as a software engineer at Gluon. Being on Java since 1999, he is a JavaFX advocate, developing JavaFX applications for mobile platforms and embedded platforms. He also works on open source projects, co-authoring a JavaFX book (JavaFX 8 Introduction by Example), blogging, tweeting, and speaking at conferences (such as JavaOne, JAX, Jfokus, JavaLand, CodingSerbia). José lives with his wife and four kids in Valladolid, Spain.

Sean M. Phillips is a Java Software Architect currently working on ground systems for Space Science missions at the NASA Goddard Space Flight Center. He has developed embedded systems, and modeling, simulation, and visualization software for projects from commercial & military RADAR, heavy manufacturing, Battlespace Awareness, and Orbital Flight Dynamics. Sean is the lead developer of F(X)yz, a free third-party library for JavaFX 3D components and data visualization tools. Sean enjoys sharing his experiments through blog entries on various sites, including Java.net, and The NetBeans DZone. Sean lives in Bowie, Maryland, USA with his very supportive wife Zulma and sons Sebastian and Sean Alexander.
Mark Heckler is a Principal Technologist & Developer Advocate at Pivotal, a conference speaker, and published author focusing on software development for the Internet of Things and the Cloud. He has worked with key players in the manufacturing, retail, medical, scientific, telecom, and financial industries, and with various public sector organizations to develop and deliver critical capabilities on time and on budget. Mark is an open source contributor, and author/curator of a developer-focused blog. Mark lives with his very understanding wife, three kids, and dog in St. Louis, Missouri, USA.