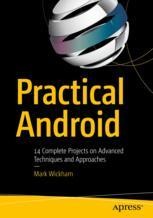 Choose the best approach for your app and implement your solution quickly by leveraging complete projects. This book is a collection of practical projects that use advanced Android techniques and approaches, written by Android instructor Mark Wickham. Mark has taught a series of popular classes at Android development conferences since 2013 and Practical Android covers content from his most popular classes. Each chapter covers an important concept and provides you with a deep dive into the implementation.
The book is an ideal resource for developers who have some development experience, but may not be Android or mobile development experts. Each chapter includes at least one complete project to show the reader how to implement the concepts.

Who This Book Is For
Those with prior experience with using Android and have a strong Java background.

Mark Wickham is a frequent speaker at Android developer conferences. He has been teaching Android since 2013. His popular classes cover practical topics such as connectivity, push messaging, and audio/video. As a a freelance Android developer, Mark has lived and worked in Beijing since 2000. Mark has led software development teams for Motorola, delivering infrastructure solutions to global telecommunications customers. While at Motorola, Mark also led product management and product marketing teams in the Asia Pacific region. Mark has been involved in software and technology for more than 30 years and began to focus on the Android platform in 2009, creating private cloud and tablet based solutions for the enterprise. Mark majored in Computer Science and Physics at Creighton University, and later obtained an MBA from the University of Washington and the Hong Kong University of Science and Technology. Mark is also active as a freelance video producer, photographer, and enjoys recording live music.