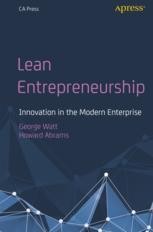 Innovation in the Modern Enterprise

Utilize this comprehensive guide in your organization to create a corporate incubator that protects innovative ideas from oppressive corporate processes and culture and gives those ideas the resources and environment they need to grow and have the best possible chance to thrive.

Innovation is hard. Ironically, innovation in a large enterprise can be even more difficult. Policies designed for mature businesses often crush emerging businesses along with the entrepreneurial spirit of the innovators. Procedures can make it difficult, even impossible, for innovative employees to get their ideas funded, or even seen. As a result, even companies with their roots in innovation can find themselves unable to innovate, with a devastating impact on employee morale and often resulting in the exodus of the most creative employees.

In Lean Intrapreneurship the authors leverage decades of personal experience innovating in large enterprises to explore the root causes of failure to innovate in established organizations, and offer a solution to the innovator’s dilemma. The book includes a recipe for creating a repeatable program for innovating in large organizations, including tools, tips, and strategies developed by the authors as they created an innovative incubation program for a multi-billion-dollar technology company. It also offers a wealth of information to help aspiring intrapreneurs and entrepreneurs bring their ideas to life.

Anyone with an innovative idea who wants to make it real but does not know where to begin; anyone struggling to innovate inside an established company; anyone who wishes to make their existing company more lean, agile, and efficient; anyone who wishes to start a program to incubate new, innovative ideas inside an established company

George Watt has been passionate about technology from a very early age and built his first “computer” out of cardboard boxes somewhere around age five. He led the design workshops for the Accelerator program described in this book and created and deployed its foundation artifacts and ceremonies. Throughout his career, he has delivered innovations of his own such as a knowledge base for a neural network-based predictive performance management solution, one of the earliest private clouds (2005), and a lightweight event management agent. A transformative leader, he has spearheaded initiatives that have enabled organizations to address complex technology problems, deliver new business benefits, and drive millions of dollars in savings and productivity gains. He began his technical career as a systems programmer/sysadmin and systems engineer. He has held many national and global leadership positions, and has led global teams spanning North America, Europe, Asia, and Australia. As VP of Strategy for CA Technologies Office of the CTO, he is passionate about helping budding intrapreneurs turn great ideas into viable businesses, and is responsible for the global scientific research, worldwide innovation initiatives, and the ongoing evolution of the Accelerator program. He is co-author of The Innovative CIO (Apress), and tweets as @GeorgeDWatt.

Howard Abrams is Distinguished Engineer and Senior Vice President at CA Technologies. Working at CA since 2002 has given him the opportunity to take on several diverse technical and leadership roles—from software architecture to user experience. In his current role, he is responsible for CA’s internal incubator, CA Accelerator, where incubations function like lean startups and internal innovators receive the support and funding they need to develop and test new products. Prior to joining CA, he held technical positions in organizations, including Muse Corporation, US Navy, Paradigm Simulation, MITRE Corporation, and Jeppesen Sanderson. He has been granted nine patents and has several additional pending. He holds a PhD in Computer Science from the Naval Postgraduate School as well as a BSc in Aerospace Engineering from Embry-Riddle University. Although he began coding at age seven in the Chicago, Illinois suburbs, he now enjoys spending his free time with his wife and two children in the San Francisco Bay Area in California.