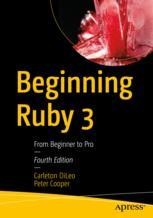 From Beginner to Pro

Learn the principles behind object-oriented programming in Ruby and within a few chapters create a fully functional Ruby 3-based application. You'll gain a basic understanding of many ancillary technologies such as databases, XML, web frameworks, and networking - some of which will be needed for your first Ruby application.  Based on the bestselling first and second editions, Beginning Ruby 3, 4th Edition is a leading guide to learn Ruby from the ground up.

The new edition of this book provides the same excellent introduction to Ruby as the previous editions plus updates for the newest version of Ruby, including performance through an improved allocator, decreased heap fragmentation and more.  Also, added: details on the just-in-time compiler, fewer limits on GIL (Global Interpreter Lock), and a static type checker.

You’ll see why the light and agile Ruby programming language remains a popular open source scripting option for developers building today's web applications. This book can also be used as a textbook or companion to a textbook on beginning Ruby programming. After reading and using this book, you'll have a firm handle to program in the Ruby language.

Beginning programmers, programmers new to Ruby, and web developers interested in learning the foundations of the Ruby programming language.
Show all
About the authors

Carleton DiLeo is a founder, author, and developer who brings nearly two decades of experience working with technology. His expertise includes building high-traffic websites, big data systems, and video games. This wide base of knowledge provides Carleton with a unique perspective when working with Ruby.

Peter Cooper is an experienced Ruby developer, trainer, and publisher who runs Ruby Inside, the most popular blog in the Ruby and Rails worlds, with 18,000 subscribers. He also curates RubyFlow, a popular Ruby community link blog. Over the past few years he has developed, launched, and sold two startups (Feed Digest and Code Snippets), both powered by Ruby and Rails.