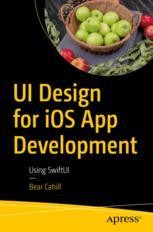 Design is a challenge for most developers. Without a background or training in user interface skills, it’s hard to navigate what choices make the best sense for the end user. This book shows you how to migrate from Storyboards to SwiftUI to design dynamic and engaging UIs for iOS apps.

SwiftUI is new in iOS 13 but you may want to support past versions as well. To satisfy this, you'll start by reviewing nib/xib files and Storyboards and then move into SwiftUI and explore how to design apps in both UI toolkits. Gaining a firm base in technologies old and new will allow you to future proof your UI during this period of transition.

Developers generally want to stay in code, but UI development tends to be a visual effort. This book takes a very structured and code-like approach to UI design to take the fear away. You’ll grasp Storyboards and Auto-Layout/Constraints, while also learning to move past them with the easier options in SwiftUI. A clear understanding of both technologies is key to keeping your most functional coding and also making things look right.

With UI Design for iOS App Development, you’ll learn SwiftUI easily and get back into your code quickly.

iOS developers building a strong foundation in UI design to fill in the gaps from their training. For veteran developers, it’s vital to be able to match your coding skills with equal UI/UX abilities.
Show all
About the authors

Bear Cahill has been a developer since he was 12. Like many developers, he initially wanted to be a game developer, but that’s not as accessible as data-driven development roles. Much of the focus of education and job experience is low- level and based in binary data. UI design, while technical, is often neglected. Developers tend to struggle and “get by” at best. He has experience in teaching Auto-Layout/Constraints and other “difficult” UI topics to coders who are used to working in dry code.