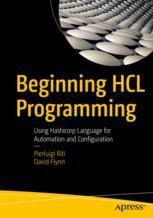 Get started with programming and using the Hashicorp Language (HCL). This book introduces you to the HCL syntax and its ecosystem then it shows you how to integrate it as part of an overall DevOps approach.

Next, you’ll learn how to implement infrastructure as code, specifically, using the Terraform template, a set of cloud infrastructure automation tools. As part of this discussion, you’ll cover Consul, a service mesh solution providing a full-featured control plane with service discovery, configuration, and segmentation functionality. You’ll integrate these with Vault to build HCL-based infrastructure as code solutions.

Finally, you’ll use Jenkins and HCL to provision and maintain the infrastructure as code system. After reading and using Beginning HCL Programming, you'll have the know-how and source code to get started with flexible HCL for all your cloud and DevOps needs.

Define the Terraform template with HCL

Anyone new to HCL but who does have at least some prior programming experience as well as knowledge of DevOps in general.

Pierluigi Riti is a senior DevOps engineer at Coupa Software and Sunchronoss Technologies. Prior to that, he was a senior software engineer at Ericsson and Tata. His experience includes implementing DevOps in the cloud using Google Cloud Platform as well as AWS and Azure. Also, he has over ten years of extensive experience in more general design and development of different scale applications particularly in the telco and financial industries. He has quality development skills using the latest technologies including Java, J2EE, C#, F#, .NET, Spring .NET, EF, WPF, WF, WinForm, WebAPI, MVC, Nunit, Scala, Spring, JSP, EJB, Struts, Struts2, SOAP, REST, C, C++, Hibernate, NHibernate, Weblogic, XML, XSLT, Unix script, Ruby, and Python.
David Flynn is an Associate Analyst in Employee Access Business Operations at Mastercard. He is an Electronic Engineer with experience in telecommunications, networks, software, security and Financial Systems. David started out as a Telecommunications  Engineer working on Voice, data and wireless systems for Energis and later Nortel Networks supporting systems such as Lucent G3r, Alcatel E10 & Nortel Passport. He then did some time in Transport and Private security abroad before retraining in Computing, Cyber Security and Cloud Systems plus doing Cyber Security & Telecomm research for the Civil Service. He has completed separate Diplomas in Computing and Cloud focusing on Windows, C# , Google, AWS and Powershell amongst other technologies. David also has worked as a C# Engineer. More recently David has worked for various fintech companies including Bank Of America Merril Lynch focusing on technical & Application Support encompassing such technologies as Rsa Igl, Rsa SecurID, IBM Tam/Isam, Postgres/Oracle databases, Mainframe, Tandem, CyberArk, MaxPro and Active Directory.