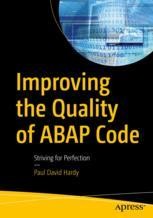 Improving the Quality of ABAP Code

Gain an in-depth understanding of the large number of common problems found in ABAP programs and have a robust methodology for fixing problems when you find them. This book also shows you how to prevent them from occurring in new programs.

A large chunk of the world’s biggest organizations use SAP software and virtually all of them have very large amounts of custom code. However, a lot of that custom code is not as good as it could be. In this book we look at why object-oriented programming is the basic building block for improved program quality and at the test-driven development that this enables. We cover the three pillars of clarity, stability, and high performance on which a high-quality ABAP program stands. You will then move on to the user interface, which needs its own set of standards for high quality. In the final chapters, you will learn about specialist topics such as user exits, making sure code will run on the latest releases of SAP, and how to add your own automated custom code quality checks.

Paul Hardy joined Heidelberg Cement in the UK in 1990. For the first seven years, he worked as an accountant. In 1997, a global SAP rollout came along and he jumped on board and has never looked back. He has worked on country-specific SAP implementations in the United Kingdom, Germany, Israel, and Australia.

After starting off as a business analyst configuring the good old IMG, Paul swiftly moved on to the wonderful world of ABAP programming. After the initial run of data conversion programs, ALV reports, interactive Dynpro screens, and SAPscript forms, he yearned for something more and since then has been eagerly investigating each new technology as it comes out, which culminated in him writing the book, ABAP to the Future.

Paul became an SAP Mentor in March 2017 and can regularly be found blogging on the SAP Community site and presenting at SAP conferences in Australia (Mastering SAP Technology and the SAP Australian User Group annual conference) and at SAP TECHED Las Vegas. If you happen to be at one of these conferences, Paul invites you to come and have a drink with him at the networking event in the evening and to ask him the most difficult questions you can think of, preferably about SAP.