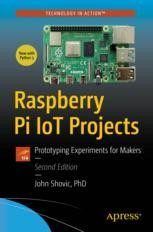 Build your own Internet of Things (IoT) projects for prototyping and proof-of-concept purposes.Updated for the Raspberry Pi 4 and other recent boards, this book contains the tools needed to build a prototype of your design, sense the environment, communicate with the Internet (over the Internet and Machine to Machine communications) and display the results.

The software is presented as reusable libraries, primarily in Python and C with full source code available, making this version a valuable learning resource for classrooms and learning labs.
What You'll Learn
Who This Book Is For

Primary audience are those with some technical background, but not necessarily engineers. It will also appeal to technical people wanting to learn about the Raspberry Pi in a project-oriented method.

Dr. John C. Shovic is currently Chief Technical Officer of SwitchDoc Labs, LLC, a company specializing in technical products for the Maker Movement, and InstiComm, LLC, a company specializing in mobile medical software solutions for health practitioners. He is also Chief Technology Strategist at Stratus Global Partners with a focus on supplying expertise in computer security regulatory and technical areas to healthcare providers. He has worked in industry for over thirty years and has founded seven companies: Advance Hardware Architectures, TriGeo Network Security, Blue Water Technologies, MiloCreek, LLC, InstiComm, LLC, SwitchDoc Labs, LLC and bankCDA. As a founding member of the bankCDA board of directors, he currently serves as the chairman of the loan and technology committees. He has also served as a Professor of Computer Science at Eastern Washington University, Washington State University and the University of Idaho. Dr. Shovic has given over 70 invited talks and has published over 60 papers on a variety of topics on Arduinos / Raspberry Pi, HIPAA, GLB, computer security, computer forensics, embedded systems and others.