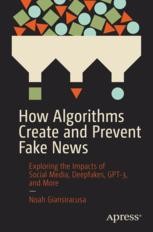 Exploring the Impacts of Social Media, Deepfakes, GPT-3, and More

"It's a joy to read a book by a mathematician who knows how to write. [...] There is no better guide to the strategies and stakes of this battle for the future."

“By explaining the flaws and foibles of everything from Google search to QAnon—and by providing level-headed evaluations of efforts to fix them—Noah Giansiracusa offers the perfect starting point for anyone entering the maze of modern digital media.”

—Jonathan Rauch, senior fellow at the Brookings Institute and contributing editor of The Atlantic

From deepfakes to GPT-3, deep learning is now powering a new assault on our ability to tell what’s real and what’s not, bringing a whole new algorithmic side to fake news. On the other hand, remarkable methods are being developed to help automate fact-checking and the detection of fake news and doctored media. Success in the modern business world requires you to understand these algorithmic currents, and to recognize the strengths, limits, and impacts of deep learning---especially when it comes to discerning the truth and differentiating fact from fiction.

This book tells the stories of this algorithmic battle for the truth and how it impacts individuals and society at large. In doing so, it weaves together the human stories and what’s at stake here, a simplified technical background on how these algorithms work, and an accessible survey of the research literature exploring these various topics.

How Algorithms Create and Prevent Fake News is an accessible, broad account of the various ways that data-driven algorithms have been distorting reality and rendering the truth harder to grasp. From news aggregators to Google searches to YouTube recommendations to Facebook news feeds, the way we obtain information today is filtered through the lens of tech giant algorithms. The way data is collected, labelled, and stored has a big impact on the machine learning algorithms that are trained on it, and this is a main source of algorithmic bias ­– which gets amplified in harmful data feedback loops. Don’t be afraid: with this book you’ll see the remedies and technical solutions that are being applied to oppose these harmful trends. There is hope.

Who This Book is For

Noah Giansiracusa received a PhD in mathematics from Brown University and is an Assistant Professor of Mathematics and Data Science at Bentley University, a business school near Boston. He previously taught at U.C. Berkeley, University of Georgia, and Swarthmore College. He has dozens of publications in math and data science and has taught courses ranging from a first-year seminar on quantitative literacy to graduate machine learning. Most recently, he created an interdisciplinary seminar on truth and lies in data that was the impetus for this book. He has received national grants and spoken at international conferences for his research in mathematics, and he has been quoted several times in Forbes as an expert on artificial intelligence. Noah also created a high school outreach program for underrepresented and disadvantaged youths, focusing on mathematics and statistics in the courtroom, that was headlined by an Obama-appointed Federal Circuit judge.

“Noah’s book brings the refreshingly impartial, data-driven content one gets from a lucid mathematics professor. The scale of reach enabled by technology means algorithms are the only viable operational approach. Mastering their limitations and moderating the commercial interests they serve is the responsibility of all those who work in data science. The effects of algorithms on the fabric of society could be comparable to carbon emissions on global warming. We have a chance to act early. Highly recommended reading.” (Leda Braga ("the most powerful woman in hedge funds"), founder and CEO of Systematica Investments)

“Imagine Genghis Khan with an AK-47 – that's what cutting-edge technology and computer algorithms have put in the hands of the next generation of liars, tyrants, and autocrats. Through the use of social media bots, deep fakes, and computer-assisted writing, fake news is now much more threatening and insidious than the "yellow journalism" of old; through the weaponization of technology, you won't even know that it's happening. Numerous TV pundits decry the assault on truth these days, but how many really understand its deep roots in information technology? To fight back, we not only have to go after the liars, but also the truth-assault weapons they have at their fingertips. Read this book to understand just how scary things have gotten over the last decade, but also how those of us who want to defend truth, facts, and evidence can employ the tools of technology to fight back.” (Lee McIntyre, author of Post-Truth)

“Misinformation and deepfakes are the unique social-technological challenges of the era of social media and deep learning that every information consumer should be aware of. The book by Noah Giansiracusa provides a comprehensive yet concise account of this complex multi-facet problem, from its very cause to its impact and potential solutions. The book strikes a superb balance between readability and accuracy in the description of the core technologies.” (Siwei Lyu, SUNY Empire Innovation Professor of Computer Science and Engineering, University at Buffalo)

“It's a joy to read a book by a mathematician who knows how to write, even when it tells the discouraging tale of a business model – targeted digital advertising – that is hijacking the tech sector and destroying its soul. With no hype, little jargon, and precise explanations, the author describes both the conquests the ad-tech empire made by deploying more powerful algorithms and the preparations rebels are making to fight algorithms with algorithms. There is no better guide to the strategies and stakes of this battle for the future.” (Paul Romer, Nobel Laureate, University Professor in Economics at NYU, and former Chief Economist at the World Bank)

“You can read a hundred writers bemoaning the pollution of the infosphere; Noah Giansiracusa is one of the few who dares takes you behind the curtain to see the gears and guts of the fake news machine, and the competing algorithms that aim to counterbalance it.” (Jordan Ellenberg, bestselling author of How Not To Be Wrong and Shape and John D. MacArthur Professor of Mathematics, University of Wisconsin)

“The issues surrounding AI and misinformation are some of the most complicated – and important – we face. Giansiracusa helps us understand and confront them.” (Jonathan Zittrain, George Bemis Professor of International Law and Professor of Computer Science, Harvard University)

“AI is ushering in breakthroughs in just about every industry.  Yet there is a dark side:  fake news.  So what can be done?  Well, Noah Giansiracusa’s book is the answer.  He provides an engaging look at fake news – along with the cutting-edge technologies like GPT-3 and deepfake GANs – and shows the various tools that can fight it.  This book should be a priority for anyone looking at AI.” (Tom Taulli, the author of Artificial Intelligence Basics: A Non-Technical Introduction)

“By explaining the flaws and foibles of everything from Google search to QAnon—and by providing level-headed evaluations of efforts to fix them—Noah Giansiracusa offers the perfect starting point for anyone entering the maze of modern digital media.” (Jonathan Rauch, senior fellow at the Brookings Institute and contributing editor of The Atlantic)
Show all