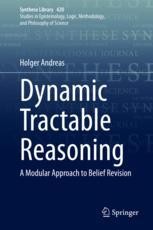 A Modular Approach to Belief Revision

This book aims to lay bare the logical foundations of tractable reasoning. It draws on Marvin Minsky's seminal work on frames, which has been highly influential in computer science and, to a lesser extent, in cognitive science. Only very few people have explored ideas about frames in logic, which is why the investigation in this book breaks new ground. The apparent intractability of dynamic, inferential reasoning is an unsolved problem in both cognitive science and logic-oriented artificial intelligence. By means of a logical investigation of frames and frame concepts, Andreas devises a novel logic of tractable reasoning, called frame logic. Moreover, he devises a novel belief revision scheme, which is tractable for frame logic. These tractability results shed new light on our logical and cognitive means to carry out dynamic, inferential reasoning. Modularity remains central for tractability, and so the author sets forth a logical variant of the massive modularity hypothesis in cognitive science.

This book conducts a sustained and detailed examination of the structure of tractable and intelligible reasoning in cognitive science and artificial intelligence. Working from the perspective of formal epistemology and cognitive science, Andreas uses structuralist notions from Bourbaki and Sneed to provide new foundational analyses of frames, object-oriented programming, belief revision, and truth maintenance. Andreas then builds on these analyses to construct a novel logic of tractable reasoning he calls frame logic, together with a novel belief revision scheme that is tractable for frame logic. Put together, these logical analyses and tractability results provide new understandings of dynamic and inferential reasoning.

​Holger Andreas studied philosophy and physics at the Universities of Leipzig and St Andrews. He completed his PhD on Carnap's logic of science in 2005, wherein he developed a novel semantics of theoretical terms. During a postdoctoral year at Stanford University in 2007, he started his work on frames and frame concepts, driven by an emerging interest in the interrelations between logic, knowledge representation, and human cognition.
Following his postdoc, Andreas was Assistant Professor at the University of Bonn and at LMU Munich. Meanwhile, he was a member of the Munich Center for Mathematical Philosophy, where he completed his habilitation (postdoctoral thesis)  in 2012. After his habilitation, he was a Heisenberg Fellow at LMU Munich (funded by the German Research Foundation). He moved to Canada in 2014, where he is currently an Assistant Professor at the University of British Columbia.
Holger Andreas' research interrelates philosophical logic with philosophy of science, epistemology, and cognitive science. In addition to the logical foundations of tractable reasoning, he explores conditionals and their use in logical approaches to causation and explanation.