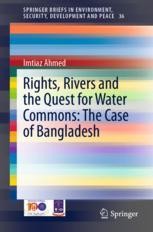 Rights, Rivers and the Quest for Water Commons: The Case of Bangladesh

Right to water may sound novel and somewhat dramatic, yet it has been central to the quest of human civilization for thousands of years. One of the earliest references to water as ‘common property’ can be found in the Jewish laws as early as 3000 BCE.Similar views are also found in Islam. In fact, the Arabic word for Islamic law - shari’ah - originally meant “the place from which one descends to water.”Since water is a gift from the divine to all living beings, sharing water is regarded as holy duty. This is found across religions, regions, societies, and communities, from New Zealand to Nigeria, from Bangladesh to Brazil. But then, what transformed the divine sanction? What led to the negation of the ‘commons,’ with sharing of the riverine water across territorial boundaries suffering the most?The answer probably lies as much as in the politics of safeguarding one’s personal or national interests as it is in the limitations imposed by our disciplinary understanding of things.In this context, a thorough reexamination, even reconceptualization,of some of the core issuesis required.Firstly, the concept of water needs to be understood not as H2O, as it is done in physical sciences,but as H2OP4. That is, the meaning of water in social sciences must include not only ‘twice hydrogen plus oxygen’ but also four P’s - pollution, power, politics and profit. This is not to discount the ‘science’ in the conceptualization of water but rather to add elements central to social sciences.Secondly, the concept of river needs to be redefined and understood not as a carrier of water, as assumedin most of theWestern languages, but as ‘nadi,’ a flow consisting of prana (life), shakti (power), and atman (soul), as etymologically definedin most of the South Asian languages. This comes closer to what critical hydrologists would say, WEBS, that is, a ‘river’ consists of water, energy, biodiversity and sediment. In this light, any fragmentation of transboundary river waterin the name of ‘sharing’becomes an unworkable option, unless of course a mechanism is found to ‘share’the water of the river along with its energy, biodiversity and sediment, and that again, without distorting and harming the life of the river!Thirdly, the subject of ‘water commons’needs to be approached from the standpoint of ‘rights’ of both human andriver. This is to flag the notion that nature, including rivers, has ‘rights’just like humans, although their manifestations may be different. In fact, empowered humans, particularly those in control of the state, have more ‘responsibility’ than ‘rights’ in dissuading themselves and others from creating conditions of human wrongs, not only against fellow human beings but also against nature.Finally, if the ‘rights’ ofhumans are to be ensuredthen there is an urgent need to reconceptualize and mainstream the human as a multiverse being. This is because humans are not only political beings but also economic, cultural, ecological, technological, and psychological beings. In this light, if conflicts are to be contained then humans need to be empowered in all possible areasof life – politics, economics, ecology, culture, technology, and psychology. This would certainly require empowering each and every person, all at the same time receptive to nature in general and rivers in particular.The book is designed to initiate a discourse on the civilizational quest for water commons, indeed, with the expectation that a discussion on rights and rivers would lead to a creative flow of ideas and practices.