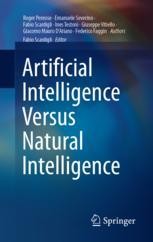 This book centers around a dialogue between Roger Penrose and Emanuele Severino about one of most intriguing topics of our times, the comparison of artificial intelligence and natural intelligence, as well as its extension to the notions of human and machine consciousness.

Although from completely different points of view, all the authors seem to converge on the idea that it is almost impossible to have real "intelligence" without a form of "consciousness". In fact, consciousness, often conceived as an enigmatic "mirror" of reality (but is it really a mirror?), is a phenomenon under intense investigation by science and technology, particularly in recent decades. Where does this phenomenon originate from (in humans, and perhaps also in animals)? Is it reproducible on some "device"? Do we have a theory of consciousness today? Will we arrive to build thinking or conscious machines, as machine learning, or cognitive computing, seem to promise?

These questions and other related issues are discussed in the pages of this work, which provides stimulating reading to both specialists and general readers.

Roger Penrose revolutionized General Relativity in 1965, introducing new powerful topological techniques to study the singularity problem. With his younger colleague Stephen Hawking, he developed the famous singularity theorems: if General Relativity is true, there must be a space-time singularity in the past (the Big Bang), and there must be singularities in the future (black holes). Then, Penrose also made fundamental contributions to quantum theory, proposing that the (spontaneous) collapse of the wave function is due to gravitational interaction. Experiments are designed in these years to verify this hypothesis. In the early 1990s, he tackled the problem of consciousness, finding evidence for the non-algorithmic nature of the mind and therefore its non-reproducibility on a machine. Among the many prizes, he received the Wolf Prize, the Dirac Medal, and the Nobel Prize for Physics 2020.

Emanuele Severino has been a professor at University of Venice, an academician of Lincei, and is largely recognized as one of the greatest theoretical philosophers of our time, comparable with another giant of the 20th century, Martin Heidegger. His interpretation of becoming, which seems to challenge common sense, leads to a surprising vision of the world and of history. He is known to the general public both for his philosophical essays and for his observations on the great themes of contemporary life.

Giacomo Mauro D'Ariano is a professor of Theoretical Physics in Pavia, where he created in 2000 the Quantum Information Theory Group, and has led it since then. He played a major role in making quantum information theory a new paradigm for the foundations of quantum theory and fundamental physics in general. In 2010, he proposed a rigorous derivation of (finite-dimensional) Quantum Theory from a set of information–theoretical postulates. With Federico Faggin, he also works on the (quantum) origin of consciousness.

Federico Faggin is an Italian-American physicist, engineer, inventor and entrepreneur. He is best known for designing the first commercial microprocessor, the Intel 4004, in 1971. He then led the development of Intel 8008 and 8080. He was the co-founder and CEO of Zilog, the first company dedicated to microprocessors, which developed the Zilog Z80 and Z8 processors. Later he was co-founder and CEO of Cygnet Technologies, and Synaptics. Faggin received from President Obama the 2009 National Medal of Technology and Innovation, the highest honor in the United States for technological progress. In recent years, Faggin has focused on the study of consciousness. In 2011, he created the Federico and Elvia Faggin Foundation to support the scientific study of consciousness.

Ines Testoni is a professor of Social Psychology at the University of Padova, where she directs the master in Death Studies & End of Life. Her studies focus on the thought of Emanuele Severino, in particular on issues related to death, and on gender discrimination. She belongs to the European network of research and intervention for the elaboration of bereavement (BNE). She authored a dozen volumes, and a hundred articles in specialized journals of international importance.

Giuseppe Vitiello is an honorary professor of Theoretical Physics at the University of Salerno. He carries out research in elementary particles physics, and in biological systems and brain physics. He authored more than 200 publications in scientific journals, and in monographic volumes. He authored the books "Quantum Field Theory and its macroscopic manifestations" (with M.Blasone and P. Jizba), and "My Double unveiled” on the quantum dissipative model of the brain. He also edited the book "Brain and Being”, on topics between science, philosophy, language and arts.

Fabio Scardigli is a theoretical physicist affiliated with the Polytechnic University of Milan and the Institute Lorentz of Leiden University. He authored more than 60 scientific publications, which focus on some pioneering work on generalized uncertainty principles, on the (quantum) physics of black holes, on planetary systems, and on foundations of quantum mechanics.