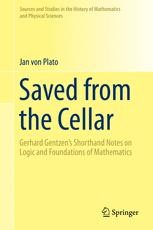 Saved from the Cellar

Gerhard Gentzen’s Shorthand Notes on Logic and Foundations of Mathematics

Gerhard Gentzen is best known for his development of the proof systems of natural deduction and sequent calculus, central in many areas of logic and computer science today. Another noteworthy achievement is his resolution of the embarrassing situation created by Gödel's incompleteness results, especially the second one about the unprovability of consistency of elementary arithmetic. After these successes, Gentzen dedicated the rest of his short life to the main problem of Hilbert's proof theory, the question of the consistency of analysis. He was arrested in the summer of 1945 with other professors of the German University of Prague and died soon afterward of starvation in a prison cell. Attempts at locating his lost manuscripts failed at the time, but several decades later, two slim folders of shorthand notes were found. In this volume, Jan von Plato gives an overview of Gentzen's life and scientific achievements, based on detailed archival and systematic studies, and essential for placing the translations of shorthand manuscripts that follow in the right setting. The materials in this book are singular in the way they show the birth and development of Gentzen's central ideas and results, sometimes in a well-developed form, and other times as flashes into the anatomy of the workings of a unique mind.

“This book is obviously indispensable to historians of logic in the immediate wake of Gödel’s 1931 incompleteness theorems. … Saved from the Cellar is also valuable for less specialist readers (like myself ) who wish to understand the broader outlines of what proof theory has meant to several of its leading creators.” (Colin McLarty, Isis, Vol. 111 (1), 2020)

“The book contains translations of shorthand notes which survived in the Nachlass of the mathematical logician Gerhard Gentzen. ... The book is valuable source for the history of modern logic; the editor did an excellent work in getting the shorthand notes, first transcribed in normal German text, and then translating it to English.” (Reinhard Kahle, zbMath 1414.03002, 2019)

“Every general reader interested in modern logic and its history, … may find a source of inspiration in Genzen’s unpublished notes of the thirties, as well as for the philosopher concerned with epistemological aspects of modern logic.” (Adrian Rezus, Studia Logica, Vol. 107, 2019)

“This is an account and transcription of two slim folders of stenographic material in Gerhard Gentzen's handwriting that were found in 1984. … this book is a valuable contribution to the history of the development of mathematical logic in the first half of the twentieth century.” (Henry Africk, Mathematical Reviews, December, 2017)