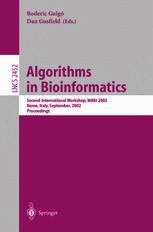 We are pleased to present the proceedings of the Second Workshop on Al- rithms in Bioinformatics (WABI 2002), which took place on September 17-21, 2002 in Rome, Italy. The WABI workshop was part of a three-conference me- ing, which, in addition to WABI, included the ESA and APPROX 2002. The three conferences are jointly called ALGO 2002, and were hosted by the F- ulty of Engineering, University of Rome “La Sapienza”. Seehttp://www.dis. uniroma1.it/˜algo02 for more details. The Workshop on Algorithms in Bioinformatics covers research in all areas of algorithmic work in bioinformatics and computational biology. The emphasis is on discrete algorithms that address important problems in molecular biology, genomics,andgenetics,thatarefoundedonsoundmodels,thatarecomputati- ally e?cient, and that have been implemented and tested in simulations and on real datasets. The goal is to present recent research results, including signi?cant work in progress, and to identify and explore directions of future research. Original research papers (including signi?cant work in progress) or sta- of-the-art surveys were solicited on all aspects of algorithms in bioinformatics, including, but not limited to: exact and approximate algorithms for genomics, genetics, sequence analysis, gene and signal recognition, alignment, molecular evolution, phylogenetics, structure determination or prediction, gene expression and gene networks, proteomics, functional genomics, and drug design.