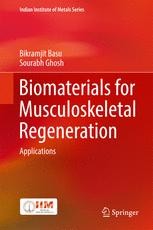 This book discusses a number of case studies to showcase the translation of research concepts to lab-scale materials development for biomedical applications. The book intends to motivate active researchers to develop new generation biomaterials. This book is meant for readers, who are already familiar with the broad area of biomaterials. The book introduces readers to the field of additive manufacturing of biomaterials and teaches them how to extend this innovative processing approach to a variety of biomaterials for musculoskeletal applications. It covers both in vitro and in vivo biocompatibility and toxicity assessment for a broad range of biomaterials in the context of bone tissue engineering. It works to sensitise researchers in the field of translational biomedical engineering on the importance of clinical trials and discusses the challenges ahead in this important field of research. This book will be useful to clinicians, professionals and researchers alike.

Dr. Bikramjit Basu is currently Professor at the Materials Research Center and holds Associate Faculty position at Center for Biosystems Science and Engineering, Indian Institute of Science (IISc), Bangalore. He is currently an Adjunct faculty at Indian Institute of Technology Kanpur (IITK). After his undergraduate and graduate degree in Metallurgical Engineering, he earned his PhD in Ceramics at Katholieke Universiteit Leuven, Belgium in March, 2001. After a brief post-doctoral stint at University of California, Santa Barbara, he joined IITK in November 2001 as Assistant Professor and was promoted to Professor at IITK in March, 2012.

Over close to last two decades, Bikramjit Basu has made outstanding contributions to the field of Biomaterials, wherein he has brought in a strong materials engineering perspective to address biologically and clinically relevant problems. An ardent believer of ‘Bedside to bench to bedside’ concept, he is currently leading, as principal investigator, the largest center of excellence on Biomaterials in India with an interdisciplinary team of 15 co-investigators and 20 young researchers (of seven institutions) from diverse background of materials science, histopathology, polymer science, biomechanics, ceramics engineering, prosthodontics, orthopedics and biomedical entrepreneur to translate biomaterial innovations to orthopedic and dental applications. As Principal Investigator of multi-institutional research programs on biomaterials funded by Indo-US Science and Technology forum (2008-2012) and UK-India Education & Research Initiative, UKIERI (2009-2012), he has played a pivotal role towards the success of multiple bilateral projects in the area of orthopedics and cardiovascular tissue engineering. His collaborative research with Brown University on developing PLGA-carbon nanofiber based cardiac patches has received media attention worldwide. One of the landmark outcomes of his UKEIRI project has been to establish long term implant stability and osseointegration of a new generation of strontium-substituted glass ceramic implants for osteoporosis treatment. Prof. Basu’s international standing and impact on the field are illustrated by his prolific publication record (more than 225 peer-reviewed journal articles, including 25 papers in journals with high impact factor (>5.0), more than 20 invited review papers/book chapters) and citation record (total citation: ~ 5,300, H-index: 41). He currently serves on editorial board of 12 SCI journals. A critical citation analysis by Elsevier-Scopus has placed him as the topmost Biomaterial scientist of India, based on publications during 2010-2015. In order to promote Biomaterials research, he has been instrumental in initiating a new international conference series, BIND (Design of Biomaterials) and organised it at IITK (2006) and IISc (2012). In addition, he organized 20 thematic sessions at major conferences organised by American Ceramic Society and Society for Biomaterials. He has delivered 20 Plenary/Keynote lectures and 140 invited seminars in USA, UK, France, Germany, and Japan. Dr. Basu has served as a research adviser to 16 PhD students and mentored 10 young academic colleagues.Prof. Basu’s contributions in Engineering Science have been widely recognised. He is one of the youngest recipients from the Metallurgy/Materials Science community as well as the only Biomaterial Scientist so far to receive India’s most coveted science award, Shanti Swarup Bhatnagar award (2013). He is an elected Fellow of the Indian National Academy of Engineering (2015), West Bengal Academy of Science and Technology (2014), Society for Biomaterials and Artificial Organs (2014) and National Academy of Sciences, India (2013). In 2015, he received National Bioscience award from the Government of India for unique contributions in the frontier areas of biological sciences. He remains the only Indian from India to receive the prestigious ‘Coble Award for Young Scholars’ (2008) from the American Ceramic Society.

Dr Sourabh Ghosh has been working as Associate Professor at IIT Delhi since 2008. After completing his PhD in Surgical Oncology from University of Basel, Switzerland (2003 - 2006), he received Fellowship for Prospective Researchers (“Stipendien für Angehende Forschende”), a highly prestigious grant for young scientists, who are at the point of starting their independent research career, from Swiss National Science Foundation, for pursuing research at the Tufts University, Boston (2006-2007).

His research highlights include designing bioinks with tailored composition and rheology to develop complex 3D scaffolds. Using 3D printed hydroxyapatite, he conducted clinical trials for oral cancer patients at the Lady Hardinge Hospital, New Delhi. Results demonstrated successful healing in severe maxillofacial osteotomies, for which he received the Gandhian Young Technological Innovation award. In parallel, preclinical investigations of such 3D printed scaffolds are ongoing to assess their osteogenic and angiogenic potential at AIIMS. He has developed injectable silk hydrogel to deliver stem cells and/or glucosamine in degenerated disc, which activated pathways of organogenesis for back pain relief. This work was featured in Rajya Sabha TV. Some other in vitro models successfully established include; in vitro osteoarthritis model, healthy as well as scarred human skin models, micropatterned thermoresponsive matrices for engineering corneal cell sheets.

He has been honored with the MAHE award by the Society of Biomaterials and Artificial Organs, and received Outstanding Young Faculty Fellowship by Kusuma Trust, IIT Delhi. So far, his team has published more than 40 research papers in peer reviewed journals with 4 book chapters and 2 patents, with 2 more currently in process.